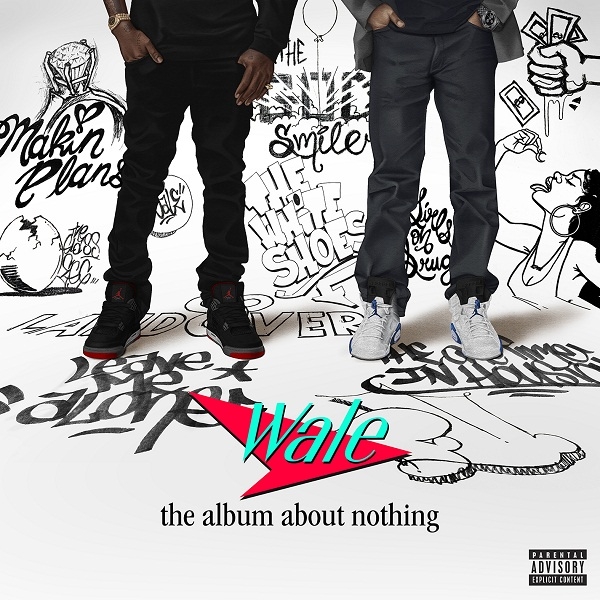 When Wale isn’t trying to be cool, The Album About Nothing soars

The Album About Nothing is an intimate Go-Go jam, where Wale finesses complicated lyricism infusing metaphors, his deepest secrets and the best music he’s ever made. A follow-up to the 2010 mixtape More About Nothing, the album employs the same thematic Jerry Seinfeld presence and wisdom. J. Cole, Sza, AG3, Jeremih and Usher make guest appearances and aid the MMG rapper in creating a ripened sound that is his most vulnerable.

The album strings together some of the strongest tracks back to back. “The Helium Balloon” begins acoustically, with murmured vibrations as the only instrumentation. Wale’s voice is calm but stable, spitting enlightened rhymes with ease: “I use to put my faith in the yarn, and now communication is gone/ I agree we’ve gone distant, my new location the charts.” He addresses a lot of the critics on this track, admitting to some redirection, but mostly sharing his sense of pride about his integrity. The Seinfeld interlude illustrates this idea of Wale and his music being a helium balloon and as consumers, we get lifted as we absorb his art.

“The White Shoes” and the J. Cole assisted “The Pessimist” follow in true juxtaposition of each other. Where “The White Shoes” is sentimental and symbolic, discussing the hype of sneaker culture, comparing it to the addiction and hustler mentality of the drug game and being clear on what really matters in a positive way. “The Pessimist” engages in some controversial dialogue about the black community from a very “glass-half-empty” perspective. “Nigga feelin’ hopeless/ Starin’ at the idiom box, riddle me this/ If a killer was a nigga would niggas still really care/ Cause niggas worse than Zimmerman livin’ life everywhere.” Wale goes on to analyze the pollution of reality TV and backed up by Cole, the record sends a strong message about accountability, especially among celebrities.

It’s interesting how connected Wale and J. Cole are. They’re both brilliant, musically and intellectually and that’s clear from their interesting lyricism that consistently holds its own place among the current top tier. But when they miss, they miss badly. Neither artist can select or create fresh beats to save their lives and they often teeter the line between corny and righteous.

Wale is undoubtedly his best when he is sharing thoughtful stories over R&B soundscapes. But songs like “One Time in Houston” and “Girls on Drugs” work too hard and unsuccessfully to imitate the popular kids in hip-hop (i.e. Drake) and don’t present any originality.

Often the problem is he concentrates his energy on placating the mainstream. He works so hard to be seen as “cool” and “accepted,” when in reality, nobody thinks Wale is very cool. We love Wale because his lyricism is intricate and poetic. His rhymes are introspective, except universal and he taps into human nature and emotion that sometimes feels scary to admit we feel. He’s sensitive about his shit as illustrated every other week on Twitter as he aims his fiery fingertips at [insert new music blog of the week.] But Wale brings variation to hip-hop and you gotta respect him for it.

“The Need To Know” is an incredible duet with TDE’s first lady, SZA. Wale uses a nonchalant but interesting cadence to evoke carelessness for the woman he’s involved with and the questions she’s trying to get answers to. SZA counters with luscious but sedated vocals and takes on the persona of having no standards for her love, but sadly, she’ll accept anything the man will give her. However, it doesn’t take long for Wale to deliver a record that celebrates his ambitious women. “The Bloom” is upbeat and has an undeniable groove that is infectious.

Although the two singles, “The Matrimony” and “The Body” do seem sloppily placed or more conceivably tacked on the end, it doesn’t make the records any less great. Usher sounds exceptional and contemporary, while Seinfeld offers guidance on the uncertainty of marriage that shows up when any form of growth is on the horizon. Likewise, Jeremih does his thing with his rework of R. Kelly’s “You Remind Me of Something,” while Wale charms his lover with sensual car references.

Wale has proved with this album that he is coming into his own as an artist. His confidence in his carved lane has allowed him to soar musically and The Album About Nothing shows real maturity. Although Wale can afford to take more risks musically, his lyricism shines. Wale streams his inner consciousness in compelling rhyme patterns that feel personal yet relatable to his listeners. As all of Folarin’s work, the album won’t touch everyone, but it certainly moved me.