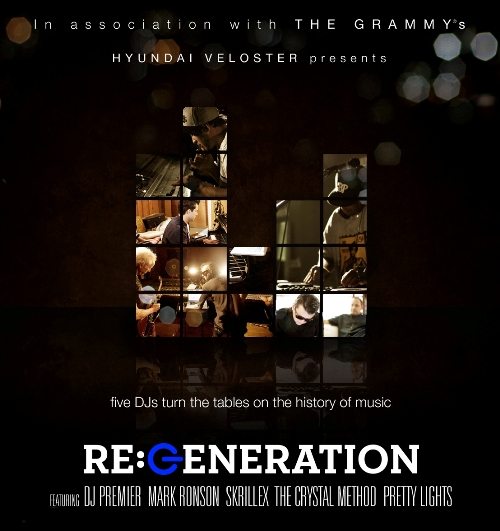 Hyundai, in association with the Grammys, bring together five of the most influential producers and DJs in music for the Re:Generation Project. Through the eyes of DJ Premier, Mark Ronson, Skrillex, The Crystal Method, and Pretty Lights, the documentary explores the history, songwriting, and studio process of different musical genres.

Last night at the Remix:Lab in New York City, viewers got a sneak preview of what to expect of the film coming out this winter through a Q&A with DJ Premier and the director himself, Amir Bar-Lev. Below are snippets of their responses and insight on the film.

When asked the reason for doing the film, Amir mentioned the obvious reason being money but also the chance to work with DJ Premier, someone who he’s admired in hip-hop for many years.

They also talked about their most memorable experiences. Being that the DJs were pulled from their genre comfort zone, DJ Premier talked about his experience working in classical. He’s sampled it before but after working with the orchestra, he grew a greater appreciation and respect. Learning how to conduct music was what Premier found most memorable for him.

Amir enjoyed the level of access he had working with Premier in the studio and just getting to see him work. Premier teased the project him and Nas were working on with the Berklee School of Music Symphony Orchestra.

Other features in the film include Erykah Badu, LeAnn Rimes, members of The Doors, and more. After wrapping up the Re:Generation experience, DJ Premier jumped on the turntables playing original hits that spun back to the 70s/80s/90s and now. He also played a snippet of the unfinished project with him, Nas, and the Berklee Orchestra.

The Re:Generation Project hits theaters this winter. Experience the event and watch the preview below.