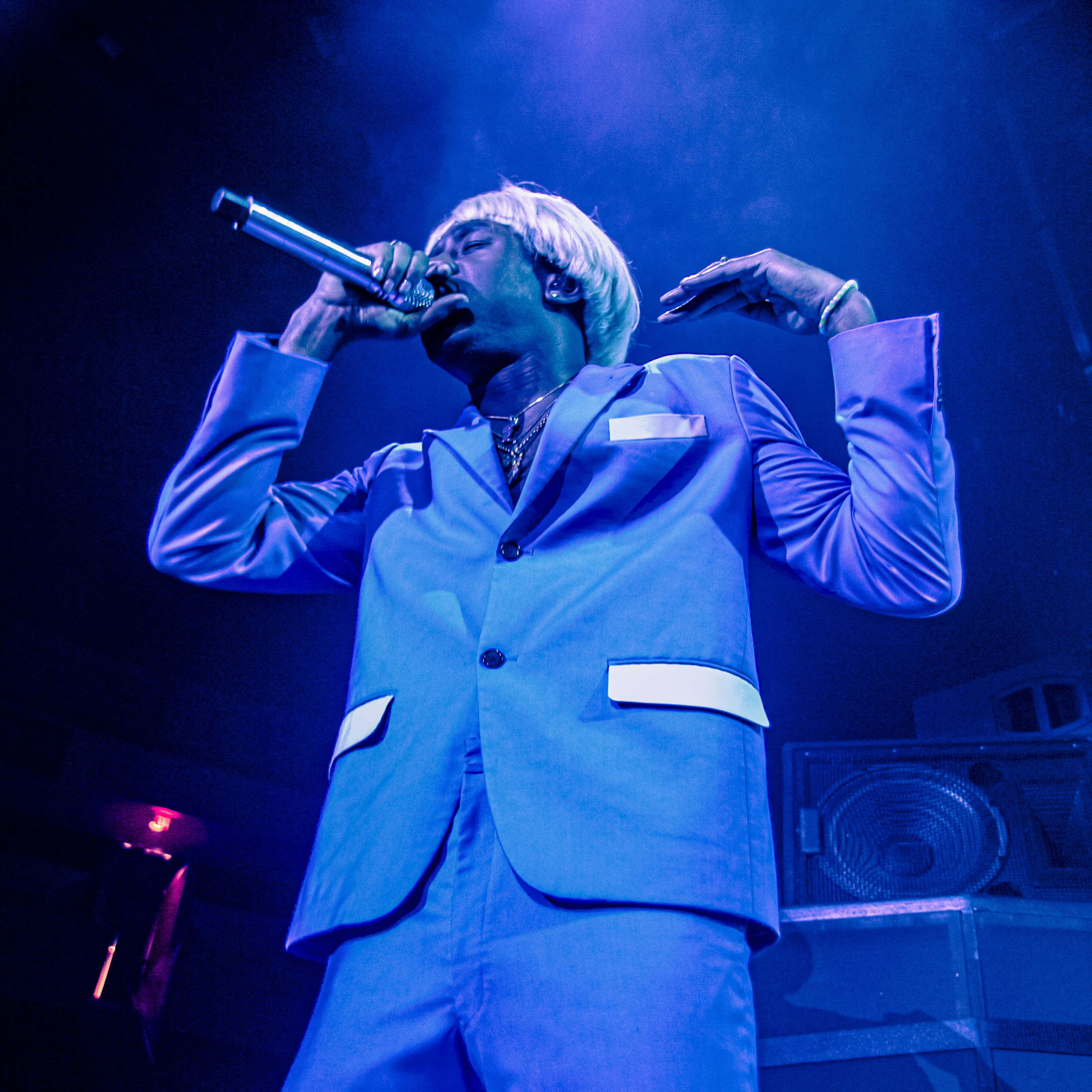 Review: Tyler, The Creator’s Hunched Back of Modern Fame

Observing Growth, Vulnerability, and Vision on from the IGOR Tour

by Brendan McGuirk for KillerBoomBox

If it’s been done before, Tyler, The Creator isn’t interested in doing it. He’s not the re-creator, after all.

On Tuesday, September 10, the former Odd Future frontman and current pantsuit enthusiast visited Boston’s Agganis Arena and proved himself not only to be an original, but also an artist whose preoccupation with emotional turmoil and personal growth has fueled a singularly fascinating career.

It’s difficult to summon other popular musical figures who have had a more unpredictable arc than the erstwhile Mr. Okonma. Prince, Bowie, and Reed come to mind, for their interests in the pliability of sounds and masculinity. But those guys are all dead and gone, as is the world they were speaking to. We wake up each morning and are besieged by reminders of how today today is, and if artists are meant to reflect and react to their times, then we as audiences crave expert creatives to articulate themselves as well as they can in the now, because what’s past can neither save nor comfort us.

Many prolific artists will often claim that their latest work is their best, most thoroughly realized effort. Audiences can blanch at this, as their preferences might have more to do with their personal context than the individual doing the expressing. Your relationship with a song might be static, but our lives aren’t, so it’s particularly rewarding when an artist’s growth continues to provide bedding for your evolving experiences. Plus, it helps when it sounds fucking awesome.

In watching him perform it, vamping, preening, and bounding ecstatically across the stage, IGOR plainly seems to be Tyler’s favorite creation. It’s too proud, it knocks too hard, it’s too expansive and bold and original not to be. Tuesday night he cited EARFQUAKE as his favorite song, perhaps of the record, perhaps of his catalogue, and it was easy to see why. Its desperate pleas for a lover to stay, its frantic acceptance of culpability — it’s a delicious concoction of the agonized but confident persona Tyler has spent years publicly unpacking.

The evolution of Tyler’s sonic sensibilities over his discography has been a rich follow. With each album effort, he adds more skills and sounds to his repertoire, deepening his relationship with his craft as he digs deeper into himself to draw out art. Whether through production, instrumentation, or songwriting, he clearly obsesses over improving with each attempt, not because it will earn accolades or fuel fans’ love for him — he has that locked up. He’s doing it because he likes to. It’s the same reason he shared which song is his favorite — care if you like, but what’s consequential is that this is for him.

The first half of the show was all IGOR. Sporting a bobbed blonde wig that reminded audiences of a certain age of Master of the Universe Prince Adam, he drew power from his pain as he arched himself over the microphone like the album’s namesake henchman. But the pain is only half the equation. Feeling pain is insular, but sharing it is bold, and it’s in that brassy bravado that Tyler finds his hook. Hearing him sing it underscores how tremendously unafraid an album IGOR is, how confident and nuanced and perfectly at-ease in its contradictions it allows itself to be. Be sexy and be scared. Be seeking and be serene. Be needy and be okay with it. It all lives in harmony, like a rapper all-the-way screaming in halfway drag.

The first half of the set was all IGOR. The second leaned heavily into 2017’s Flower Boy, which saw Tyler begin to thaw certain performative aspects of his persona in favor of one that allowed his incongruities to coexist. Running through familiar hits like IFHY and Yonkers and reminded listeners of how obsessed with aggression Tyler was in his earliest days. But his career has seen him continually peel back layers, revealing that the anger was only a waystation to his real desire, which is to stare you dead in the eye and asks what your problem is.

Besides, it isn’t as though Tyler just got vulnerable. He was at every step of the way, when his expressions of anger belied a need for comfort. He seems to be a more able conveyer of his needs today, though, and his work is richer, more specific for it, never more plainly than when See You Again brought down the house. As much rock star as jilted lover, he broke out the Metallica-style stage flamethrowers for his amped up A$AP Rocky collaboration, Who Dat Boy, careening from side to side in euphoria as the arena swayed in approval.

Tyler has had quite a history in Boston, and he cited as much during the Agganis performance. He lovingly recalled the 2011 incident that saw a riot break out during a Newbury Comics signing, and the wildness of fans, as he broke into the rowdy Yonkers. He also chided the BU-heavy crowd for its overwhelming whiteness, coyly signaling the few black onlookers he could spot. It was pointed, but it was harmless — the GOLF merch wore handsomely on every stripe of his big tent army.

My personal favorite Tyler song has always been his loving horrorcore duet with Frank Ocean, She. A masterpiece in lyrical storytelling, there was something about the tension of the adoring stalker ballad that stayed stuck knifelike to my ribs. When Tyler’s orientation became a more pronounced part of his public conversation, around Flower Boy, I found myself wondering whether there was something previously unseen that he and Frank had been transmitting to us all those years ago, in plain sight. Then I realized I was being a gossipy bitch and kept it moving. Watching him in a rare performance of the song, I realized why it had always held my attention so — the delicate Frank chorus contrasts with Tyler’s rough and painfully insecure threats in a perfect graphic blend of confused sexual desires. It’s the only song of its kind.

One thing you notice in seeing Tyler sing She is how little performing the song asks of him. His verses punctuate the Oceanic canvas more than coat it. But its sensibility entirely hails from its turmoil-obsessed Creator. He’s a character in that narrative, but he’s also its dungeon master controlling the scene and guiding the audience. Then, he needed a fiction to house and illustrate his conflict, of wanting and repelling. Today, he’s largely shed the artifice. He doesn’t need to be protected because he’s more confident, more able to express himself after years of refining the tools. He can present as many elements as he likes, and tune them until they find harmony.

On She, Tyler has to forcibly drag the object of his desire. On IGOR, he’s happy to instead play the PUPPET. The ropes, strings, and controls belong to him, but it’s the surrender the creator is happiest to share.