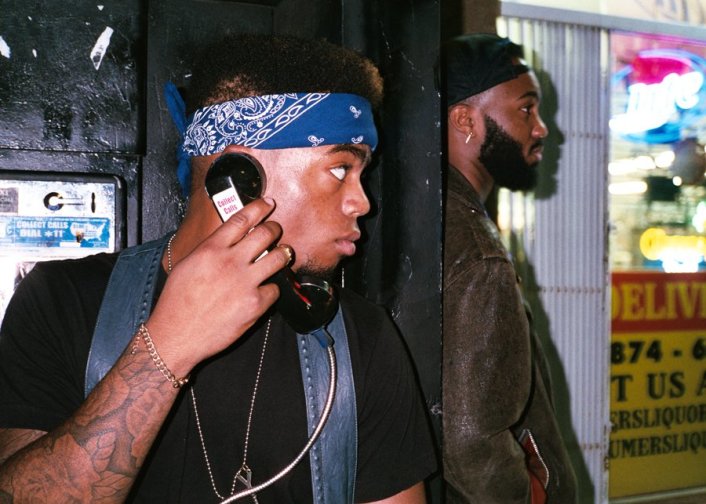 Live Review: THEY. Will Rock You

The lifeblood of music appreciation is discovery. Everybody loves the shit we already love, but energy and excitement and most importantly community all arise when something truly new ignites and inspires listeners’ passions.

In an age of algorithms and a never-ending sea of content streams assailing our eyes and ears, however, meaningful connection through discovery has also become much more difficult. It’s harder than ever to distinguish signal from noise, which is why I’m always looking for something that lures with the familiar only to lead somewhere new entirely. Pulling that off requires a network of trusted sources, and a knowing command of your own sensibility.

A month ago, I had never heard of THEY., the R&B duo out of L.A. that played the Middle East on Friday. But a well-argued Instagram post from college radio show Fresh Out the Mint made a great case for the group’s then just-released debut album, “Nü Religion: Hyena.” At their suggestion, I gave THEY. a listen, starting with their reimagining of the theme song to ’90s TV guilty pleasure “Dawson’s Creek,” into the devastating power/soul ballad, “Dante’s Creek.” As a man of a certain age and a certain sensibility, it hit me hard. You know when a slot machine is pulled with the right amount of luck, and the whirling icons click just into the winning, matching sequence? The first time I heard these dudes Dante Jones and Drew Love wail “I don’t wanna waiiiiiittt,” that was me, like a Looney Tune with my eyes both flipping into cherries. The rest of the album held up, too, and suddenly their pending visit to Boston became a can’t-miss event.

Describing THEY. feels like trying to capture a prism through another prism. THEY.’re New Edition heartthrobs with a hair metal band’s sense of revelry. They’re trap Hall and Oates. They’re church voices with their hearts set on headbanging. THEY. feel like the future, shaped by the past and its influences but limited by neither.

As the bandanna Dante wore Friday hinted, THEY. also are among the first generation of musicians whose sensibilities feel entirely shaped in a post-Frank Ocean landscape, where once-entrenched musical genres and identities bleed into one another without contradiction. If your memory reaches back just far enough, seeing that freedom serves as a reminder what bullshit those ideas of contradiction ever were, how no box was ever properly sized to fit any art worth its while.

Dante Jones and Drew Love did not disappoint. Entering through the crowd cloaked in velour boxer’s robes that signaled them as monks observing a “Nü Religion,” they took the Middle East downstairs stage and without hesitation launched into “Deep End,” their thrilling ode to inhibition. The energy didn’t dissipate, either onstage or in the crowd — a younger bunch that came fully prepared to fulfill their responsibilities as backup vocalists on hooks. After opening for Bryson Tiller at the Sinclair last year, it wasn’t THEY.’s first visit to Cambridge/Boston, but it was their first as a headliner, and to mark the occasion they brought a fan up who had attended the last show onstage to serenade her with Drew Love’s take on the Weeknd’s “High For This.” It melted the crowd. But then, so did everything they did.

Both producers and vocalists, Drew and Dante’s voices blend together as well as their influences. As quick to interpolate and quote a rock act like Metallica as they do Trey Songz by way of the Fugees, they marry vetted performance attitudes with modern party sounds to create jams that reach far and deep. Maybe you’ve never thought of Nirvana as particularly “hype,” but you probably haven’t heard the “Polly” sample on “Rather Die,” yet.

Unsurprisingly, my favorite moment of the night was the performance of “Dante’s Creek,” which Love capped with swelling, church-voice acrobatics. I think it works so well for me because it’s almost like a proof of concept that the critical, R&B yearning you hear on the song and in the show was actually there all along, waiting to be unearthed. THEY. divined something unseen out of an unexpected source. What could be more exciting than that?

Admittedly, the turn-up was never greater than on the encore — their thunderous latest single, “U-RITE,” which blares the emergency alarm with all the abandon you would expect out of a group that named their album after a hyena. Those horns transmit the message, though — THEY. have proclaimed themselves to be an act of consequence going forward.

No doubt they’ll flex their own influence, too. At the show, THEY. took note of a young, 14 year-old fan who was attending his first show, with his supportive mom in tow. It was a touching reminder of the night’s overriding vibe. You know what finding new music to love translates into? Hope.

Brendan McGuirk is a guy from the Boston area that sometimes writes about arts and things. His work has appeared in the Boston Herald and Newsarama, and he currently contributes to Comic Book Resources and Metro Boston. If you look him up on Twitter at @BrendanMcGuirk, he’s probably defending Kanye as we speak.