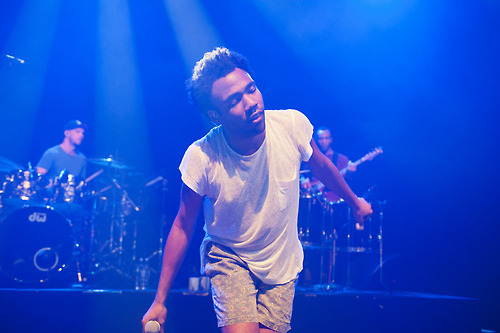 After a sweltering afternoon at City Hall plaza, the sun disappeared and the rain clouds reigned supreme during the evening portion of Boston Calling. After a weather advisory thunderstorm warning and a torrential rain storm, the final two acts of Boston Calling were put on hold until the weather subsided. This led to a full evacuation of the entire festival grounds and a lot of restless concert goers. But after the weather subsided, the festival reopened, fans filed back in, and lightning struck two more times.

Lorde reinvigorated the weary crowd with a pitch perfect performance of an array of her hits including “Tennis Courts”, “Team”, and the international hit “Royals”. Lorde has some of the most engaged and dedicated fans I have ever seen. They sang every word of her songs energetically like they would never see her again. I felt a little uncomfortable like when you see two people making out on the bus (i.e.). All in all, She had a really great performance and generated a lot of energy for Childish Gambino to carry over.

Although a bunch of die-hard Lorde fans left after her set, there was a huge turnout for Childish Gambino’s delayed set time. Wasting no time, as soon as Lorde ended, Gambino hit the stage with a live band and an electrifying performance of “Crawl”. He effortly moved through some of his hits from the Because The Internet album including “The Worst Guys”, “Telegraph Ave”, and “3005”. As a test to weed out band wagon fans, he transitioned a set to a medley of songs from his earlier projects like Camp, Royalty, and EP and let the crowd participate as much as possible. No stranger to performing, Gambino entertained by using the entire stage to dance, point out the pretty girls, and have a good time. Needless to say, he made some new fans and  made bigger fans out of the ones he already had. My Boston Calling experience was pretty good this year, excited to see what next year has in store.