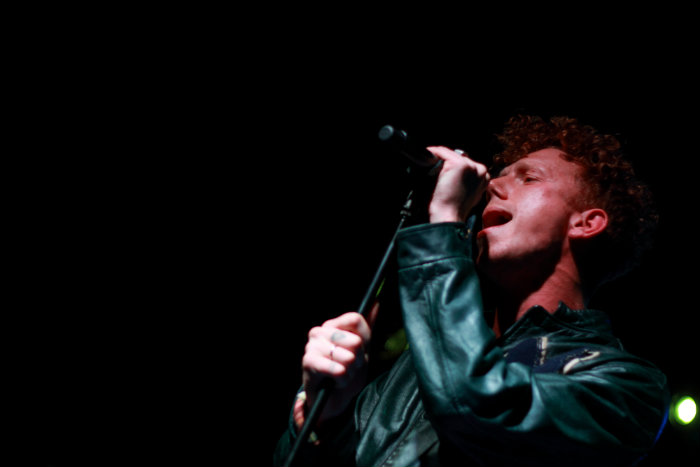 The next time Erik Hassle performs in your city, especially if he’s the opener, buy a ticket, get a good spot, and enjoy the show. You’re guaranteed to leave with a new music suggestion for your friends. As Hassle explained in a phone interview before heading out on tour, this performance was an opportunity for the crowd to have fun and “hear some new music.”

Introduced by the ominous sounds provided by his friend and Los Angeles-based producer, RRReymundo, Hassle took his place at the microphone for “Innocence Lost.” He danced along to the song, which originally features Tinashe, as Rey bobbed along hovering over the controls. A minor technical difficulty before the Swedish R&B singer/songwriter launched into “Pathetic,” didn’t slow him down. He took the time to chat with the audience and kept their energy up at The Sinclair.

Hassle’s naturally playful stage presence and powerful vocals make for an unforgettable performance, but credit must be given to RRReymundo for his live mixes. Like his remix of “Ready For You,” the live renditions enhanced the songs without straying far from the original. Whether it was the extension of the instrumental breaks or added fading background vocals, I walked away wishing he would produce a remixed version of Hassle’s EP just as he did with Across by Kilo Kish.

Among songs from last year’s EP Somebody’s Party and a guitar based Sam Cooke cover, Erik Hassle also debuted new material for the audience filling the 525-capacity venue. The first song, “Missing You,” is sentimental and clearly meant for bad weather days when that special someone pops into your head, while the set closer, “No Words” is a complete contrast. Unlike his previously released songs, it’s a feel-good, upbeat track. With lyrics like “I got a way with words / but when it comes to you / I don’t know what to say” it still maintains the personal and emotional themes present in Hassle’s music. It’s no surprise that “No Words” is currently his favorite song to perform live, as it gives him more of an opportunity to show off his dance moves on stage. Luckily we’ll all be able to dance to it soon when it’s released in a few weeks, just in time for the warm weather.

With an album due either at the end of the Summer or in early 2016, we can expect to hear and see more from Hassle. Hopefully, it’ll be in the form of a headlining tour, because his 25-minute set ended far too quickly.

Set List:
Innocence Lost
Pathetic
What Is He Like
Nothing Can Change This Love (Sam Cooke cover)
Missing You
Talk About It
No Words