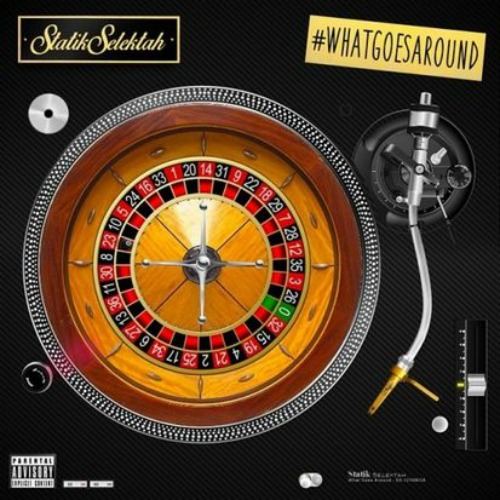 The origins of this particular album starts back when Statik Selektah was in a producer’s retreat in Hawaii where several of the greatest Rap producers stayed with Kanye West, played him music or collaborated with him on music. During one of these many sessions Statik Selektah was playing some of his beats when Kanye West interjected that while the beat was dope, Jazz was dead. That statement stuck with Statik Selektah because Jazz is essentially the music that helped to push innovation of sampled based Hip Hop production forward beginning in the late 80’s all throughout the late 90’s when incidentally both Golden Eras happened. In order to prove that Jazz was NOT “dead”, Statik then set out to make his new album with the aesthetic and direction inspired indirectly by Kanye West titled “#WHATGOESAROUND”.

The album opens with “What Goes Around” featuring Lil’ Fame and Easy Money which bleeds right into the new single “Carry On” with Joey Badass and Freddie Gibbs. “The Thrill Is Back” yields to the lead single “The Imperial” where Black Thought went Super Saiyan 5 for the hundreth time in his career. After hearing “All The Way (Pimp Hop)”  and “Back For You” it hit me that I was only 30% through with this album but looking at the tracklist containing the remaining 14 tracks this album could get even better. In retrospect? That was a damb understatement.

Easy Money and Term had been telling me about the album for weeks before I ran into them with Statik in Times Square. From there we made it over to the Conde Nast Building and took the elevator to the VEVO offices where the listening event was. Once I was there, the guys from Duck Down asked me if I’d heard the album yet. I said “No” so they started playing the record before everyone else showed up. I was the only person in the room who hadn’t heard the album yet and I just sat there listening while over half the album played before Statik walked back into the room. I had heard “Alarm Clock” and “My Time” nodding my head the whole walk but when “Fugazi” introducing 16 year old phenom  Sincere and the Action Bronson featured “Long Time” marked the album’s halfway  I knew this project had a shot for Album Of The Year contention.

The second half of the album continues to deliver and the argument can be made that Side B is better than Side A if we’re treating this album like an album or a cassette tape. “Drunk & High”, “The Chopper”, “Down Like This”, “Slum Villain” and the Heltah Skeltah reunion song “Heltah Selektah” all continue a blistering run of tracks. Just when you think there’s a break in sight next is “Overdose” followed by the haunting “Something To Cry For” featuring Boldy James. “Rise Above” features rap wunderkind Astro and Dessy Hinds which ends up yet another standout track. The strength is this album lies in it’s balance, consistency and a lack of any skippable material. There isn’t a throwaway track or any filler on this project as evidenced by the retrospective tracks “Get Away” and “God Knows”. Just when you think the album is over Hex Murda appears and announces a bonus track featuring the original Rap genius himself Kool Keith (all respect due to Kool G Rap). After 20 tracks and 68 minutes it’s safe to say that Statik Selektah has given us yet another album inspired by the culture of Hip-Hop which upholds the standards of quality that discriminating Rap fans swear by.

If you actually care for Rap that doesn’t embarrass the culture and is all about the beats and rhymes then buy “#WHATGOESAROUND”. If you want to hear emcees actually attempt to one up each other with bars because they don’t wanna be the weak link on a record then cop “#WHATGOESAROUND”. If you actually like Rap that doesn’t make you hate yourself for playing it out in public then you need to cop this album right now. It doesn’t really matter if Kanye thinks Jazz is dead because I haven’t wanted to purchase any of his albums in over 5 years. His music no longer resonates with me. I’ll be playing this record for years. In this age of disposable music that’s all a fan or a consumer can ask for. It’s available right now on iTunes, Amazon, Google Play & UGHH. You know what to do…