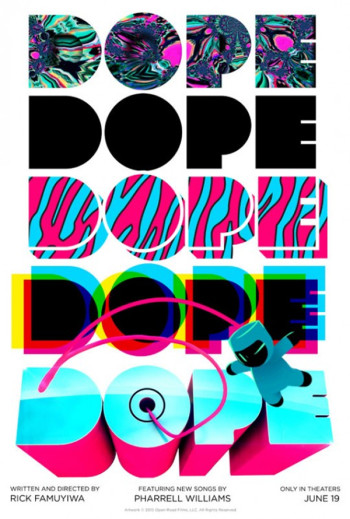 Rick Famuyiwa (“The Wood” & “Brown Sugar”) stepped out into the forefront, put on his auteur hat and wrote and directed his latest feature film called “Dope”. The buzz created around this film following its premiere at the Sundance Film Festival in late January was huge. “Dope” is yet another independently made film by a Black writer/director that dazzled audiences at Sundance. The recent tradition began back in January 2009 when Scott Sanders and Michael Jai White brought “Black Dynamite” to Sundance and it became an instant sensation. In the following years films like “Pariah”, “The Black Power Mixtape”, “Beats, Rhymes & Life”, “Middle Of Nowhere”, “Something From Nothing: The Art Of Rap”,  “Fruitvale Station” & “Dear White People” all dazzled audiences and went on to receive distribution deals. This year “Dope” continued the trend, the buzz surrounding the film went into overdrive after the initial teaser trailer dropped on YouTube but once the long trailer was released a couple of weeks ago people began to get REALLY excited about it. I recently went to an advance screening for “Dope” here in Boston and lemme tell ya, it is going to be tough writing a spoiler free film review for a film that doesn’t hit theaters for another six weeks or so but I am more than up to the challenge.

Rick Famuyiwa is adept at telling coming of age stories based in Inglewood as he did in 1999’s “The Wood”. Not only that but he showed he could write the hell out of a screenplay as he demonstrated in the heavily slept on Kasi Lemmons directed 2007 biopic of DC legend Petey Green “Talk To Me”. “Brown Sugar”? I’m not much of a fan but there are parts of it I do like, hopefully those came from Rick. In any event, Famuyiwa teamed up with producers Pharrell Williams & Mimi Valdés’ IamOTHER, Forest Whitaker’s Significant Productions (Forest Whitaker narrated the film) and Sean Combs’ REVOLT Films to bring “Dope” to the people. I haven’t been this genuinely excited to see an independent film since the buzz began around “Dear White People” last year.

The story revolves around a high school senior named Malcolm who resides in Inglewood, CA (AKA The Wood) in a section called The Bottoms. He doesn’t fit in at all since rather than be in a gang he’d rather listen to 90’s Rap and take fashion cues from old videos. Malcolm is a straight A student who’s part of a Pop Punk band with his two best friends who are also nerds that share his interests. Not only that but Malcolm wants nothing more than to escape The Bottoms and attend Harvard University. When you’re a geek living in a violent inner city neighborhood it’s next to impossible to avoid being bullied, robbed or beat up on a regular basis. Existence requires a great deal of resolve and imagination if you want to escape your environment and go to college instead. Our protagonist is single minded in that regard and refuses to let anything stand in the way of his dreams and life goals.

I sat in that theater with about 300 other Bostonians in the historic Paramount Theater located in Downtown Crossing and watched Malcolm navigate through the worlds of home, school and the street with his friends. We watched him be Black, geeky and awkward. We laughed at his misfortunes and cheered his triumphs. When I watch a film I have a few simple demands, make me want to suspend belief and just watch. I prefer films that are chock full of quotable lines and memorable moments. I’d like to become emotionally invested in either the protagonist(s) or I want to see the film all the until the resolution. I do not want to see a film that’s derivative, cliche nor unoriginal. “Dope” filled all of my requirements and prerequisites. I didn’t even feel like booing the screen when ASAP Rocky and Tyga popped up on it. THE MOVIE WAS SO GOOD THAT I PUT ASIDE MY INTENSE HATRED OF TYGA. That is astounding if you know anything about me…

Every member of this cast played their role perfectly. The music supervision was absolutely phenomenal. I felt like I was watching a group of young people just living their lives as opposed to watching a movie, even with the narration. Seeing Malcolm’s interactions with the neighborhood thugs, his crush, his friends and various adults only made you further invest in his story. “Dope” was funny, smart, original, thought provoking and entertaining. It had the perfect balance of music, nerd shit, action, violence, drugs and sex for the average moviegoers. It also had enough depth and complexity for film geeks and serious indie movie heads. In short? “Dope” made me CARE. Even more than that? It made me want to come back and see it again with family and friends when it goes into wide release on June 19th, 2015. I haven’t enjoyed watching an indie film at an advance screening this much since back in December when I saw “Top Five”. And that’s saying a lot. In closing, “Dope” was DOPE. It was everything I wanted “Dear White People” to be in terms of dealing with identity and being yourself in the face of overwhelming peer and societal pressure. It did a phenomenal job in stretching what audiences consider a “Black” movie is. As we all know, once we fail to keep pushing the envelope to redefine what Black film is, it’s a slippery slope.