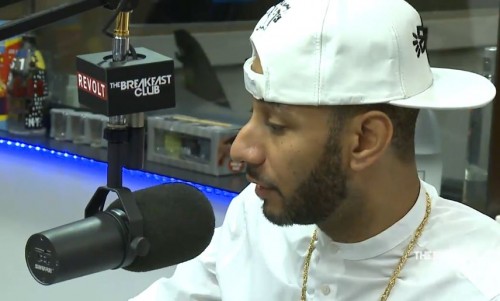 Swizz Beatz Went To Harvard To Get Respect

Swizz Beatz went to The Breakfast Club and dropped a few jewels on why he felt it was important for him to head to the Ivy League for classes. The Grammy winning producer has been in Cambridge MA taking part in Harvard Business School’s Owner/President Management program. The HBS program is geared for top executives of companies with annual sales of at least $10 million. For Swizz it was a needed step as he moved forward in the business world.

“A lot of people get complacent with their success and things that they have done before. I just wasn’t comfortable with that because I started transitioning from being a producer to a business owner. I would be in these rooms and no matter how big the deal is or how good it is people would still look at me like ‘He’s the rapper guy.’ And I’m like we all in this meeting because of what I’m bringing to the table,” said Swizz “Being that I didn’t have no credentials to go with those different things, I didn’t feel I was getting the respect that I deserved. So I said you know what, let me go and sharpen my pencil a little bit”

The producer also spoke on working with DMX again.

“You know what you wanna hear from DMX. Everyone knows what they want to hear from X. That real sh-t! I already have the album done by the way,” the producer explained. “But its more than just a record. Like what I was saying before it has to be like a movement. People really gotta believe that its on some other ish. I’m willing to really really take it there to paint that picture. And until we got it we just going to have to keep working on it.”

Watch the full interview below.