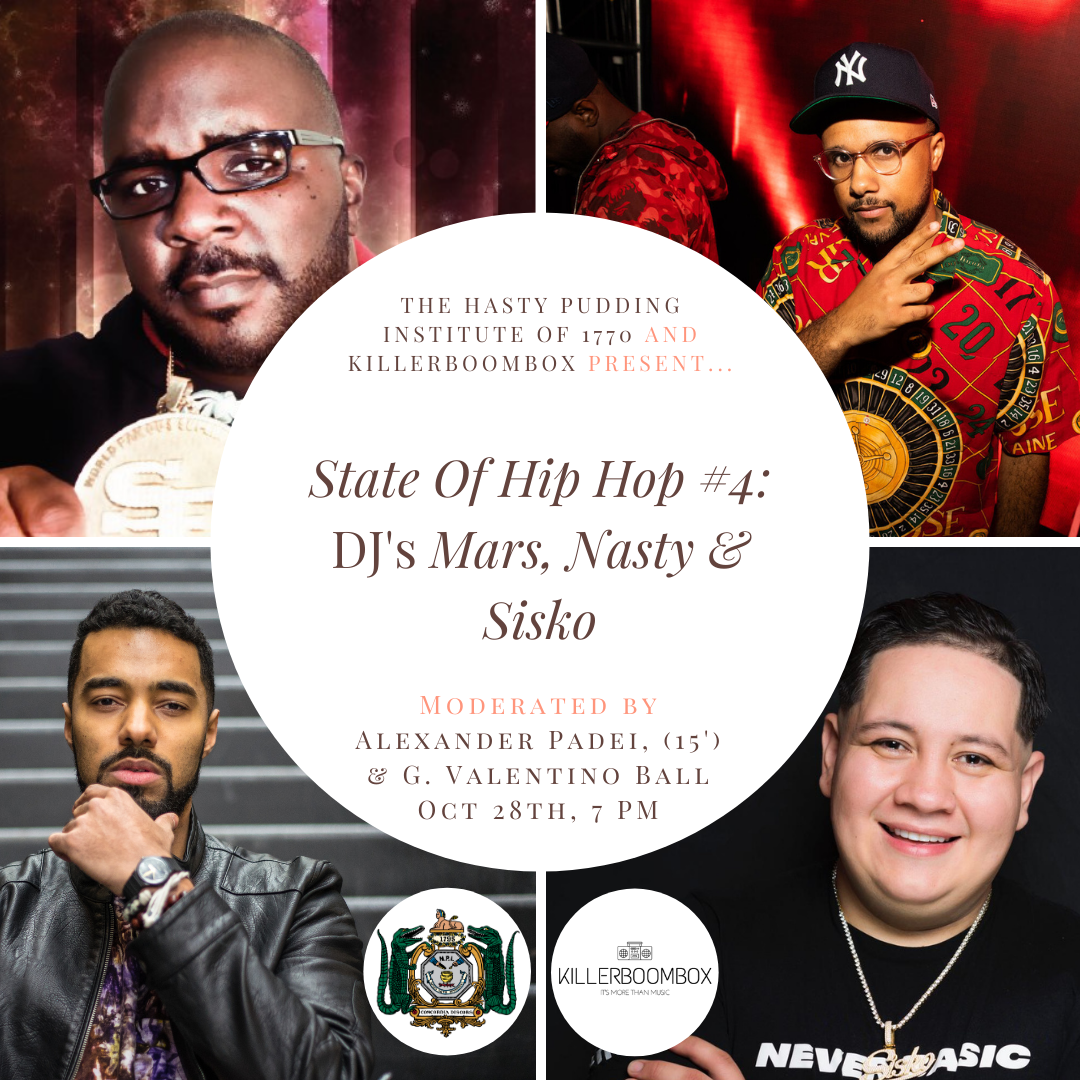 Join The Hasty Pudding Club and Music Publication KillerBoombox on October 28th @ 7:00 PM for a conversation about the changing realities of Hip-Hop music and the industry. After the panel, we will have an hour of open networking with DJs, Artists, Press and other industry professionals in attendance!

Address: Zoom by Invite, Only (RSVP Required. We will send you the Zoom link the day of the event)

First come, first served. We will set up a waitlist once we hit 125.

When Usher embarked on his first promo tour, who did he call? When Steve Harvey needed a well rounded DJ for his 2017 Sand & Soul Festival in the Bahamas, who did he call? When Grammy Award winning singer Jill Scott got married, who did she get to DJ her wedding reception. The unanimous answer is DJ Mars. A staple in the global party scene, DJ Mars has lent his talents to many of the world’s most sought after celebrities.

DJ Mars’ list of artists in which he has toured with reads like a Grammy Nomination ceremony. Usher, Ne-Yo, Ciara, Monica, Kelis, Keri Hilson, Keyshia Cole, have all relied on his ability to bring the party to the stage. DJ Mars recently wrapped up the “Great Xscape Tour”, where he was the Tour DJ for R&B superstar Monica; selling out in arenas across the country.

DJ Mars’ influence doesn’t stop at the turntables. Through his various brand partnerships; DJ Mars has worked directly with corporations including New Balance, New Era, Starter, and Monster Products. While most DJ’s sole wish is to be a part of a marketing campaign, for DJ Mars his goal was to create one. Mars’ business acumen has led to marketing deal with footwear giant New Balance. The campaign, “Where Are You Running To Next” was created by DJ Mars and has gained over 100 million viral impressions.

Again not afraid to step beyond the turntables, DJ Mars is also an accomplished author. Mars’ book “The Art Behind The Tape” is a coffee table book that details the rich history of Mixtape Culture. Having self published the book, DJ Mars has now become a global author with international sales in countries such as Belgium, Australia, Italy, France, United Kingdom, Ireland, Canada, and South Africa. As of recently, DJ Mars has licensed the book project to Blumhouse Productions (The Producers of Get Out,The Purge, Paranormal Activity) for a documentary.

Jason Almeida, professionally known as WHERE’S NASTY, is a DJ and creative producer from Providence, RI.

Some of the people, brands and institutions that WHERE’S NASTY has been able to work with include Bodega, Brown University, Rhode Island School of Design, D’usse Palooza, Brunch Bounce, ‘47 Brand, 40oz NYC, Red Bull, Pow!Wow!, Art Basel and the CIty of Providence’s PVDFest.

Sisko has been around the Dj scene for quite a while. Dj-ing since the age of 18, he’s been in the industry for 15 years. Sisko has launched a street team (Team BRK) around 2015 and held a sold out Friday night for 3 years until the beginnings of the Covid pandemic. A Celtics Hero for donating food to over 80 families during this pandemic time. Opened his first BRK store for merchandise and clothing in 2019.

Sisko has held residencies in every major club in the city and surrounding areas of Boston. Helping many restaurants, lounges, and nightclubs bounce back through proper marketing and entertainment direction.

Currently he is working with Elixir nightclub in operations and director of entertainment for the last 3+ years and holds a residency of legendary Tabu nightclub (his first nightclub that launched his dj career).

DJ, Producer, Rapper, Songwriter and Entrepreneur Alexander Padei has been making waves in Boston and Cambridge through his DJ-ing work, Original Hip-Hop/R&B records, music and entrepreneurship education and marketing consulting work. Padei hopes to inspire as many other musicians and entrepreneurs as he can through his work.