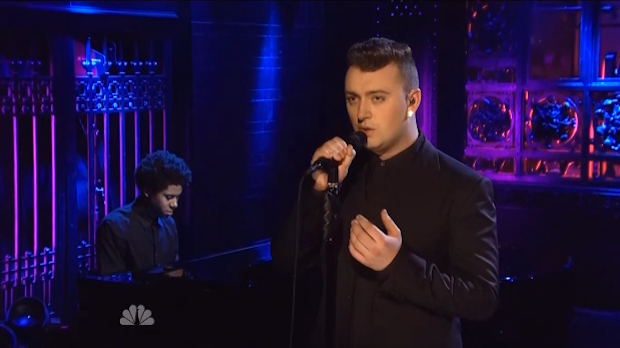 Since making his debut on Disclosure’s hit song “Latch,” Sam Smith has been securing his spot as one of the top new vocalists. The London native is quickly gaining popularity in the U.S. and has performed on late night and daytime talk shows along with Saturday Night Live. His second headlining U.S. tour kicks off at the House of Blues Boston on September 15. Unfortunately, the tour has been sold out for months. No worries though. If you can’t be there signing along with Smith, here are his 5 must-watch live performances.

On January 17, 2013, Smith performed “Latch” as part of Disclosure’s set for BBC Radio 1’s Future Festival. This was one of his first live performance of the song and it happened to be broadcast to millions in the UK and around the world. Despite his sometimes trembling voice, the vocals that made this song popular are still audible.

This performance proves that Smith’s vocals are a force to be reckoned with. His backup singers take a break while he’s accompanied by the piano and cello. The T in the Park audience sings along from the moment he starts until the very end, showing the he doesn’t need a thumping bass or various electronic sounds to have a hit song.

Mary J. Blige needs absolutely no introduction. She simply walks out onto the stage halfway through the chorus sending the audience into a cheering frenzy. Wearing a black cut out dress and jumbo diamond hoop earrings, the Queen of R&B soulfully delivers the second verse. She tones down the “Mary” until after Smith sings his “Woah’s” and “No’s” accompanied by his backup singers. They alternate the last chorus then sing the last two words together before sharing a hug.

4. “How Will I Know” Whitney Houston Cover

Most people should be banned from singing Whitney Houston songs, but Sam Smith isn’t most people. He could sing the alphabet and make you cry. When he visited SiriusXM Hits 1 in June he took on Houston’s 1985 hit, “How Will I know.” With the theme of unrequited love for his debut album, In The Lonely Hour, this cover is the perfect fit for him. The upbeat synthesizers and drums and replaced by the piano. He also uses “you” instead of “boy” and “he,” making the song more personal. Singing with his eyes closed, Smith transforms this 80’s pop song into a heartbreaking ballad.

5. “Money On My Mind” Live at the Fader Fort

“Money On My Mind” is a reminder that Smith can speed up the tempo from time-to-time. After all, he also provided vocals for Naughty Boy’s track “La La La.” He may not be dancing on stage, but there is a nice electric guitar solo that’s not on the studio version of the song.

Earlier this month, Smith performed “Latch” with Disclosure for the billionth time. After two years, the song is surprisingly not played out. The best part of the performance is how comfortable he seems on stage. This is the Sam Smith who is taking over the music world one song at a time.