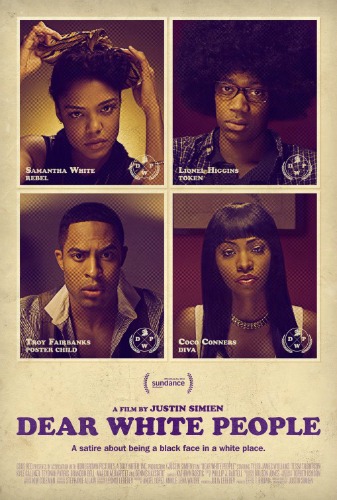 STAY WOKE: Why Films Like “Dear White People” Are A Necessity In “Post-Racial” America

We’ve made several posts about Justin Simien’s upcoming satire “Dear White People” thus far here at KillerBoomBox. We posted the teaser trailer. We next posted the long form trailer. What we haven’t yet done was the post about WHY this film is so important and why we’re pulling for it the way we are. See, we initially hoped to make this post closer to the film’s debut and I was hoping I’d see it when it had an early screening when the NABJ (National Association Of Black Journalists) was in Boston a few weeks ago. It happened earlier in the afternoon than I’d anticipated and I smacked my forehead when I saw Jamilah Lemieux tweeting about it. That meant I’d have to wait until October. DAMMIT.  In any event, the reason this post is going up in late August is because we are almost two weeks removed from the execution of Mike Brown in Ferguson, MO and the residents of that town still have yet to see the man responsible get arrested or taken into custody. While a murderer is still free, the authorities are trampling on the constitutional rights and civil liberties of townspeople, clergy, protestors that arrived from out of town as well as members of both the major and independent media. These people have been tear gassed, sprayed with pepper spray, threatened with violence, poked, prodded, provoked and denied the right to peaceful assembly. The press has been arrested for…well…being the press. The official excuse is “failure to disperse” but whenever anyone tries to comply with the order they’re summarily followed and arrested anyways.

Mike Brown was an unarmed Black male who was executed by a policeman. This policeman fired 6 shots into an 18 year old high school graduate who was less than 24 hours from attending college. Mike Brown had his hands up when he was murdered according to numerous eye witnesses and the findings of his independently conducted autopsy. Mike Brown was not a threat to the officer who shot him repeatedly as if he were a wild animal that was attacking him and threatening his life. Mike Brown was not Luke Cage, he didn’t have unbreakable skin. Mike Brown wasn’t Cyborg, he wasn’t impervious to gunfire. Mike Brown wasn’t Black Panther nor was he the new Captain America, someone so dangerous that even when he had his hands up at close range with a drawn weapon trained on him he still needed to be taken down immediately. He was a regular teenager. Except he had brown skin which automatically made him a threat that needed to be terminated. Right there in broad daylight. In plain sight of several eyewitnesses. After Mike Brown was put down, his executor stood over him in the street. Mike Brown’s body would lay in that same Ferguson, MO street for four hours before he was finally taken away. Only one reporter showed up to cover the story and she used Instagram to tell the story because there were NO news cameras in Ferguson. No other reporters other than her showed up that first night. If it wasn’t for the story getting legs via social networks like Twitter, Instagram and Facebook the story probably never would’ve gone national. From there the story soon went global. Again, NO other reporters ventured into Ferguson that first night. The murder of a college bound Black teen by a policeman just didn’t warrant enough attention on it’s own initially.

The reason people wouldn’t take this murder lying down is because it wasn’t an isolated incident. Before Mike Brown was killed on August 9th in Ferguson, MO we were in an uproar over Eric Garner being choked to death by the NYPD in broad daylight on July 17th. The entire incident was recorded. On August 5th in Beavercreek, OH John Crawford was killed by police in a Wal Mart (the video still hasn’t been released to his family over two weeks after it initially occurred) at the time the Mike Brown execution happened. Since then Ezell Ford was killed by police in Los Angeles on August 11th. The next day, Dante Parker was tased to death by an officer in Victorville, CA. Miles away from Ferguson, OH on August 19th (a full week later) Kajieme Powell was also killed by St. Louis, MO authorities. That’s five Black men killed by police nationwide in a two week span. There have been recent reports that found a Black man is killed by police every 28 hours. In these particular instances, in all of these Black men were unarmed and the officers used excessive force. The officers don’t get arrested nor charged. At the most they get  temporarily suspended from work (paid leave, mind you). In most cases, the officers are back on the street in less than a week. Meanwhile, the officer that killed Mike Brown on August 9th is still a free man as of the writing of this article on August 22nd. If you don’t find anything wrong with that then quite frankly you’re just out of your mind.

If we learned anything from the murders of Oscar Grant or Trayvon Martin it’s that Black men’s lives mean next to nothing in America. What we learned from the killing of Renisha McBride is that Black lives are forfeit to America PERIOD. In terms of media, representations of Black folks are laughable. The way we’re narrowcast in television & film even to this day is depressing. Unless it’s a “Black” show we don’t exist and if it ISN’T a “Black” show then we won’t be seen at all. In the case that it IS a “Black” movie chances are it’ll be rife with cliches, predictable plotlines, and hackneyed writing to appeal to a specific demographic or it will feature the same ol’ tired ass rotation of what we call “Blactors”. This is why by the holiday season of 2015, Loretta Devine will have played EVERY “Blactor” in Hollywood” 10 years or more younger than her’s mother. You think I’m joking? The holiday season is the one time of year studios feel comfortable releasing multiple so-called “Black” films. Hey, I don’t get it either…

The short trailer of “Dear White People” spoke to what many of us noticed and have hoped to hell one day it was addressed in film. “Hollywood Shuffle” and “Premium” both addressed the dearth of quality film roles for Black actors but it was depressing to think how little things had changed in the almost 20 years between them. If we factor in the post Tyler Perry era where studios would seemingly only release movies similar to his our only alternative available was independent film. That being said if you look in the YouTube comments or the comments section of any article about “Dear White People” you’ll see entitled White people complaining just because a movie like this even exists. They think it’s BAD for race relations rather than a way to open up genuine dialogue through satire because as we all know,  problems go away when you ignore them. Rather than this film being a vehicle to potentially foster understanding it’s seen as a form of rabble rousing. What it tells me is some people can’t sit in a theater for 90 minutes and endure what some of us face our entire existences on Earth. That saddens me to no end. The fact of the matter is that we’re feared for simply existing so when we are actually vocal about something it’s threatening the status quo. Well GOOD then. The status quo needs to be threatened and change needs to happen. If this is how America reacts to being told things that we’ve known for most of our lives or seeing things happen on a movie screen that many of us experience daily then all it tells me is this film was necessary and we need even more like it.

Change doesn’t happen without there first being turmoil. Healing can only begin once a wound is properly treated. America has a serious race problem and running away from it is not going to remedy it. All it’s going to do is further frustrate those of us that are begging America to look at itself in the mirror so it can realize once and for all how sick it truly is. It all starts with sitting down, shutting the fuck up and LISTENING to what we’re telling it. Ferguson, MO isn’t an isolated incident and if we don’t act now it will continue to happen over and over and over again. If America wants to live up to it’s billing of “The Land Of The Free and The Home Of The Brave” then it’s going to have to deliver on these freedoms and rights the country was supposedly founded on and stop being a coward in regards to it’s problem with racism and prejudice sooner or later. Preferably NOW.