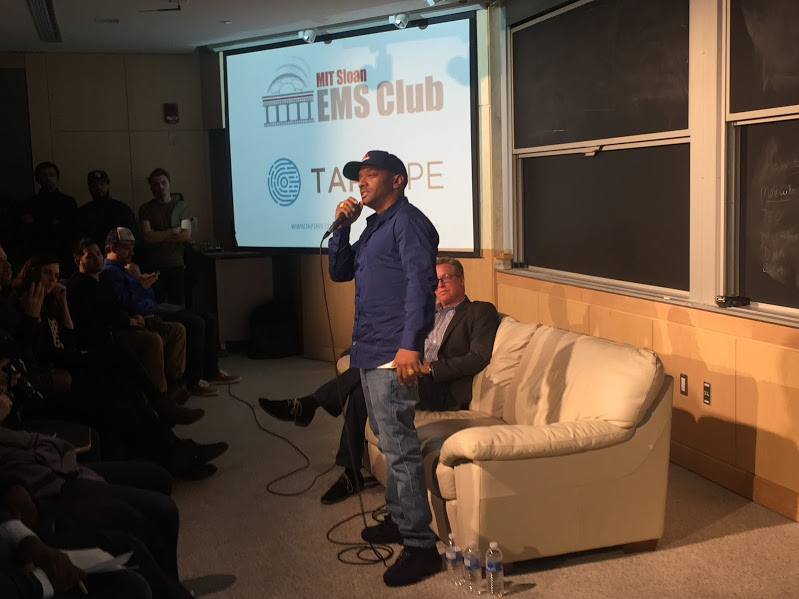 Prodigy Shares His Personal Insight On Prison Reform At MIT

This past Friday (12.4.2015) at MIT, Prodigy, the rapper primarily known as one half of the legendary Queensbridge hip hop duo Mobb Deep, sat in front of a classroom that had listeners billowing out of its doorways to discuss his time in prison. Prodigy, born Albert Johnson, was sentenced to three and a half years back in 2007 for possessing an illegal firearm. “That kind of changed my life–I went to jail at 33,” Prodigy explained. “It’s sad that it took me that long to get my life together–my decision making, my health. But I did. It changed my perspective, the way I see things, and the way I carry myself out here.”

The talk was moderated by MIT professor Ian Condry, who had no qualms getting straight to the heart of the matter. “Tell us about jail and how you got yourself together” was his first prompt of the evening. “Being locked up for me was a little bit different because I have sickle-cell anemia, which is a hereditary blood disorder. Being in prison was especially hard because I have to eat right, I have to drink a lot of water, I can’t do strenuous exercises, I can’t do physical contact sports. This is all the stuff the doctors told my family when I was a kid growing up. So when I went to jail, that was the first thing that hit me–I get sick easy and certain things can trigger [the disease]. I had to learn how to keep it under control.” Prodigy also insisted he also spent much of his time in prison reading as much as he could in order to communicate and socialize better with other inmates. “When I first got there, I didn’t want to talk or socialize with nobody because they were all criminals. But that’s not entirely true. There are some good people in jail–they just got caught up in some bad situations.”

Despite the personal growth Prodigy experienced in jail, he was unsurprisingly pragmatic about the way the system works–and how people of color are usually on the receiving end of it. “A lot of the prison population–it has to do with race, it is a racial issue. But it’s also a business issue. People are making money. They want you to fill these jails,” Prodigy stated before delving a little deeper on the topic. “It’s easier to lock up these drug offenders in the hood, in the bad neighborhoods. They made those crack laws; one gram of crack is equivalent to whatever grams of cocaine. You get caught with a little piece of crack and you’re getting sent away for a long time. It’s easier to do that than to catch someone in a suburban neighborhood where more white people are living. It’s easier to just go to the hood and catch kids on the street, addicts on the street. It’s a faster way to make the money and keep the system growing.”

“People are angry–black people are angry,” he continued. “With all of the police shootings and the incarceration rates and how everything is disproportionate with the way the prison system is set up. So you see them creating things like Black Lives Matter and protesting–it just explodes.” Prodigy also touched on the importance of family structure as it relates to youth and aggressive behavior. “My father wasn’t around when I was a kid. He was in jail, he was a drug addict, he died of AIDS. He was sharing needles because he was a heroin addict, and by the time I was 18, 19 he was gone. That definitely affected me and my guidance and my attitude and everything. My mother was a real nice person, positive lady. But she couldn’t control my rage that was inside of me. She was probably scared of me. What your family teaches you in the house definitely affects your attitude and how you carry yourself in the world.”

Ultimately, Prodigy was grateful for his ultimate salvation after prison: music. “When I was at the end of my sentence and it was getting closer for me to go home, I started realizing that when I get home I can jump right back into the music industry. Some of my friends or associates or whatever you want to call them–the people I met in jail– they can’t do what I do. They’re going to have a hard time getting a job, they got a felony on their record, nobody’s gonna hire them. They can’t get no public assistance. It’s on their record forever and it destroys their life.” Before opening the floor to questions, he voiced his advocacy for better care of inmates post-incarceration. “It’s still a huge problem. They need to have more programs for people who are transitioning out of prison–coming back into the world. But it also goes back to planning. You have to plan way ahead of time for when you get out: where are you gonna stay? Is someone going to hook you up with a job? Maybe in jail learn the skills. There are skills you can learn just from reading. Learn something so you can actually have something to come home to.”

This talk was sponsored by TapTape and the MIT Sloan Entertainment, Media, and Sports Club.