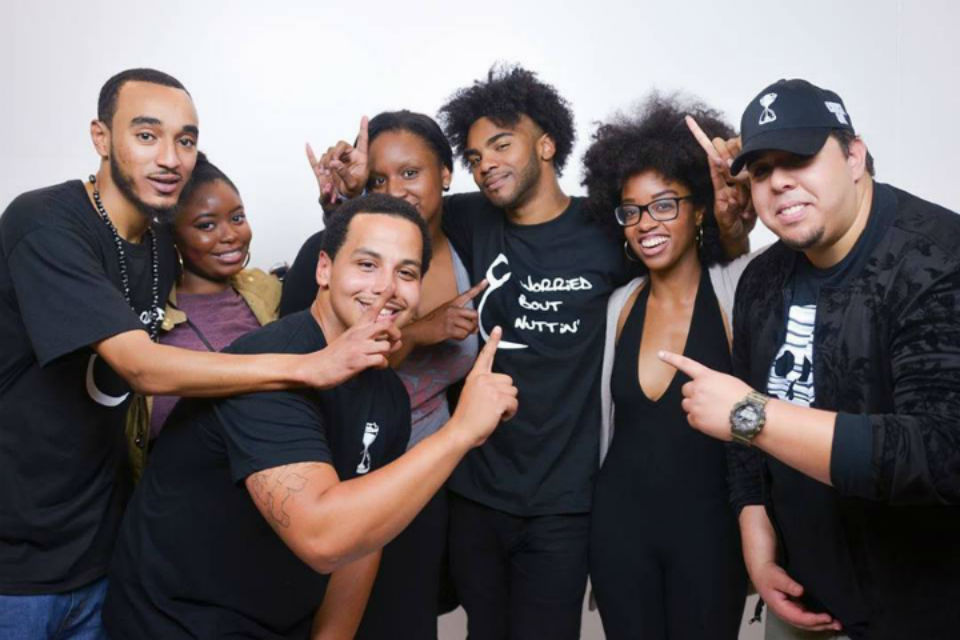 The idea of a creative collective isn’t a new or groundbreaking philosophy- groups of artists coming together like the Power Rangers to combine their collective talents into one massive creative Megazoid is as old as the idea of society itself. Recently, there’s been a resurgence of the term “creative collective”, not only as a way to describe a group of creatives coming together but as a way to describe a social movement that focuses on the sum of parts instead of the individual pieces.

Recently, KBX sat down with one of these emerging creative collectives, IamBecuzWeAre. Comprised of life coach/ entrepreneur Jeremy Colon, DJ and producer Radical One, singer and performer Papi Champeaux & rapper/ producer Prophet aka TheSoundzOfPercussion, this collective is ready to take Boston by storm. These guys are only in their early twenties and already extremely wise beyond their years. They talked to us about their goals as a group and how they think they can change the culture of the city.

Why don’t we start off with you guys introducing yourselves? Tell us a little about you individually

Radical One: I’m a Dominican born, Boston based DJ and producer. I make mainly bass heavy music. I’m building around that sound….right now I have Radical Thursdays, I release a few songs every Thursday (on SoundCloud). The hourglass is my icon…my goal is to create timeless music.

Papi Champeaux: I’m a singer, sometimes rapper known as Papi Champeaux. I’m also a performer and community activist! I’m working on a couple of projects right now… I just finished an 11 track project which will be coming out later this year…But basically, I’m just trying to spread unity throughout the community.

Jeremy: I’m a life coach, an author. I run JC Enterprises and Blessed You Clothing, a lifestyle brand. And of course, management, consultation and promotion for artists in Boston. Right now, I’m working with Radical One to get more gigs at the Middle East, we’re in talks with iHeartRadio as well…I’m building a culture that’s all about acceptance and being who you are….a fun fact about me! I gave my dad my kidney about three years ago.

TheSoundzofPercussion: I go by Prophet aka TheSoundzofPercussion. Right now I’m working on a multitude of projects, not just strictly music…I’m working on some clothing and working with other artists. I have a beat tape I’m ready to release but also just working with a lot of other young black entrepreneurs as they try to start up their own channels or podcasts, just contributing what I can…We want as many people as possible to be involved in this, in transforming Boston.

How did you guys get the idea of becoming a creative collective?

TheSoundzofPercussion: Everybody is an individual, everybody does their own thing. But when we come together as a collective, we do it for the greater purpose of putting our city (Boston) on the map…nationally, internationally, hell even intergalactically! It’s all about synergy, the parts are all equal, they’re greater than the whole together. We can all stand by ourselves and hold it down. But when we come together, its bigger than that…

It’s all about synergy, the parts are all equal, they’re greater than the whole together. We can all stand by ourselves and hold it down. But when we come together, it’s bigger than that…

Papi Champeaux: And its kind of an ego check. You know that you’re good but when you’re with other people (your collective), you’re so much better. You’re so much greater and why not do it with people that you know and trust and believe in? Working with each other was a no brainer- why not embody the message that we want to portray to everyone else?

How did y’all meet and get together?

Papi Champeaux: So it all started in middle/ high school. We all went to Boston Latin Academy from like 7th to 12th grade. We were always cool there….we all kept in contact …

Jeremy: After BLA, we all kept in touch as we all kind of went our own ways to different colleges (Lesley, UMASS, Salem State & Bentley). We all kept in contact. For me, I got into personal training, Ihab focused on his rapping and producing, Moncho went hard in singing and modeling and Conrad was DJing and also doing marketing.

TheSoundzofPercussion: It goes back to what we were saying before, everyone had their specific talents….but the beauty of it was that everybody’s talents compliment eachothers’. For example, an artist is gonna need a producer and a photographer and a videographer…it creates a nice family, we all have these different skills. We just want to create that on a larger scale from here on up.

How did you guys end deciding on doing this first Gravity art show (on September 30th)? How did y’all come to the decision that this event was one that you wanted to do?

Papi Champeaux: The art show just kind of made the most sense…it made sense for us to do something to do with music culture, we all have ties to music. Over time, we wanted to change the culture of Boston to bring people together. That’s what the show will focus on. We have vendors, artists, singers, poets, we got one of our friends to cater the event.

Jeremy: We’re really excited for this because this will be our standard for how things are going to be happening from here on out. In the past (as an artist manager) I would coordinate and do events at local galleries etc…and it just made sense to keep going with that. There’s so much creativity in Boston…but where’s the direction going? We want to harbor that and foster that….

TheSoundzofPercussion: When you think of different regions in the US, you think of NYC or Chicago or the West Coast or Atlanta, everybody has their own sound. You got drill out of Chicago, heavy 808s from the South…they have an ownership of their style and their sound. Boston doesn’t really have its own sound yet…that’s what we want to help create…

Damn Ihab, that’s exactly where I was going for this next question! Speaking of the sound of Boston, how would you guys describe your sound?

Radical One: I come from a background of Carribean style music. I’m Dominican so a lot of the music from the DR and Puerto Rico is a lot of bass and drums. I’m exploring virtual ways of making music now. My music has evolved, I started with Merengue tracks but now I’m moving into just calling it bass heavy music.

TheSoundzofPercussion: I’m a Hip Hop head and I’m really into the origins of Hip Hop so I draw a lot of inspiration from what I heard growing up in the 90s. I try to focus those elements into my music but of course you can’t stay in the past but I try to keep that authenticity (in my music)…I try to keep the essence of Hip Hop in all of my beats while still being versatile….

How important do you guys feel is a working relationship between artists and producers? I feel like some artists aren’t really sitting down with producers to create their own, unique sound…this ties back into what we were saying about the “sound” or lack thereof in Boston music

Papi Champeaux/strong>: I’m actually working on a project now with CSR, this great producer from Lynn. We basically sit down and listen to his beat and then we go over what we can add and take off together…in depth. I think in some of the music in Boston you can tell that there’s maybe a disconnect (between artist & producer). I think it’s extremely important to sit down with the person who is helping you make your music…to make sure that it makes sense. I also think there’s a lack of engineers as well…so sometimes it makes it hard (without an engineer) to get that cohesive sound.

TheSoundzofPercussion: As a producer, it’s your job to bring your artist’s vision to life…you have to sit down and build that relationship and that’s what’s going to make the both of you dynamic.

How important do you guys feel your vision is right now? Especially as young men of color trying to exist and create to your full capacity?

Jeremy: It’s all about focus and making sure you get to where you want to go…as inner city kids, sometimes we let our environment reflect where we’re going to be. From a psychological point, Boston is a shallow city. There’s not much support for artists and because of that, there’s this disconnect… Not going the traditional route and doing your own thing puts you in the position to meet other people, connect and network to find a common goal and make that magic…We just need to put our egos aside. Individually, yes we can make it happen. But as a collective, there is that support and magic there.

TheSoundzofPercussion: Just to add on to what he’s saying, when we go the non traditional route and do things ourselves, that gives us the power to own what we’re doing. And when we have the power of ownership, we can create those opportunities for people of color and for other people who don’t have those opportunities…We put ourselves in a position of power to really help and uplift people in the same boat as us…and that’s what the institutions are really scared of. Our foundation before anything else is morals and integrity…but we all want to build for our future. I’m pretty sure we all want families…why can’t my last name be just as good as Rockefeller’s last name or his as good as Rothschild? It’s about legacy and about creating opportunities for all of us

TheSoundzofPercussion: And to add to that! When you own what you do, nobody can’t tell you shit! No one can tell you anything!

Right now, we’re kind of entering this renaissance era where people don’t just do one thing, everybody does multiple things. You guys are the perfect example of this- how do you think you’re going to apply this philosophy to this creative collective y’all are building?

Jeremy: Each of us respectively is good at what we do. But opposites attract and compliment each other…each of us can help the other get to where we need to be. Its all about strengths and weaknesses..Its more or less, if you need help, then ask for help. If you need guidance, ask for guidance. It’s also all about taking ownership of what you do and make sure you take accountability for your actions. If this event (Gravity Art Show) doesn’t go how we want, we go back to the drawing board and figure out how to make the next one better.

Papi Champeaux: We have so many people from so many different arms of art. If I don’t know something, I can ask one of them to teach me…it’s a way to foster the things you don’t know and to grow.

Radical One: It’s the DIY era…we don’t need big labels, we can do it ourselves and grow enough organically so we show them we got the juice, we have the sauce…We are in the era where we do have to know more (and learn more) but in that is power because you learned those things yourself…The creative direction is yours, you learn how to do it yourself from the beginning. As a collective, we have more power and more control.

These guys are definitely an inspiration and KBX can’t wait to see more from them. The collective doesn’t have a group page yet but are working on getting one up ASAP. You can catch DJ Radical One (with Blessed You Clothing) throwing down on the tables at Clery’s on October 15th- no cover, just good music and even better people. Follow these guys on their individual channels to stay up to date with what they’re doing around Boston: