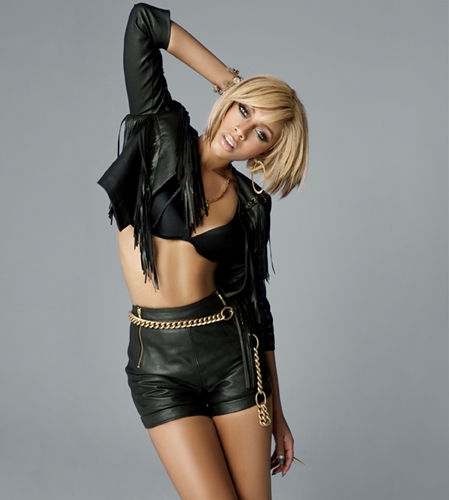 It would seem like Keri Hilson (@MissKeriBaby) was made to make hits. Writing her first song at 12 and signing her first record deal by 17 are good resume builder for those seeking work as a chart topper. Pretty good work if you can get it. And she did. The Atlanta, GA native has crafted songs for artists like Mary J Blige, Britney Spears, Pussycat Dolls, Omarion, Ludacris, and Usher. But for singer/songwriter Hilson collecting royalty checks wasn’t her idea of success. She had her eyes on stepping into the limelight and she’s done a pretty good job of that. Her debut album In A Perfect World with high profile collabs Ne-Yo & Kanye West on super producer Timbaland’s label resulted in a Grammy nod, Best New Artist wins from the NAACP Image Awards and BET Awards along with a tour with Lil Wayne. Along the way she has built a legion of diehard fans through her constant online presence. Her album release countdown videos and banter with fans on Twitter have made her “Keri Krew” into a loyal army.

With her new album, No Boys Allowed, she is working hard to show the world a whole new side to Miss Keri Baby. She explains, “I think part of being an artist is shedding off pieces of yourself with time.” Filled with girl power anthems like the TLC leaning “Pretty Girl Rock” and the ultra sexy “The Way You Love Me” (complete with internet buzzing uncut video), No Boys Allowed should make the diehard members of #TeamKeri happy and add a few new ones too. Add to that a recent appearance on VH1’s Divas tribute to the troops and you can see that Ms Keri isn’t trying to go softly into the night anytime soon.

Keri Hilson – The Way You Love Me

G. Valentino Ball: So Keri you know you damn near broke the internet with that video, right?

Keri Hilson: Did I? (Laughs)

G. Valentino Ball: Uh Yea! Did the reaction surprise you?

So I’m not surprised at the reaction. While I do understand it I know nothing I do is without reason. I just thought it was so important to be real. Even though I am not a freak 100% of the time I do have those nights in a relationship. No one likes a mundane sex life. A lot of marriages or relationships break up because they become mundane. Some nights you want it the way the way you want it. If Im being real and speaking for women, then this is how we feel sometimes. This is what we would like men to know.

G. Valentino Ball: It didn’t strike me as the most outlandish thing in the world. We have heard far worse from other artists. The reaction seems heavy because its you and we haven’t seen that from you.

Keri Hilson: Yea. I think so. I’m not mad at that. Im not mad that it catches people off guard. I don’t want people to ever expect the same thing out of me. I’m capable of a lot of things. I’ve written in a lot of genres. Its proven in that fact, the fact that I can write R&B, Hip Hop or Pop. So I want people to understand that I am a versitle being. I don’t want to be pigeoned holed. I don’t want to be in a box. If I had to be a little extreme to be climb out of that box, then that’s what I had to do.

G. Valentino Ball: On “In A Perfect World…” you came from a very vulnerable place. With this album it seems like you are going in a different direction. What are the differences between the two projects?

Keri Hilson: I’d say In A Perfect World was probably a lot more vulnerable, a lot more insecure. This time around I wanted to show the more confident side because I’m realizing how much women need this. In my travels when I meet people and I sit down and talk with my girlfriends I realize there are a lot of single, successful unhappy women out there. I’m not saying we need a man to make us happy but I’m saying. Those that want to be in a relationship. We’re all emotional creatures. We all want to be loved. I felt like “Turnin’ Me On” was the most impactful song from my last album as far as the people I’ve encountered.

G. Valentino Ball: Really? What do you think resonated with people?

Keri Hilson: Women were like, “Yes! Finally someone is saying how we really feel about guys invading our space or just coming off wrong in the first place. How are they supposed to come back from that and expect something real?” I felt the need this time to speak for women. And I think what people liked about the vulnerable records on In A Perfect World is the fact that I spoke the way we felt. Records like “Intuition”, “Tell ‘Em The Truth”. These aren’t things they are used to hearing artists talk about. In “Tell ‘Em The Truth” I did something wrong in a relationship. Most women do music to paint themselves perfect. I didn’t want to do that. I knew that’s not everyone’s story. There’s some women on the other side of the fence who have done wrong. I just want to talk about what we really really say. I think the difference is that I am showing a stronger side of me. I’m multifaceted. I’m multidimensional. I’m complex. I’m a woman. This time around I am showing a little more strength. But we do have the humble, emotional side of Keri Hilson as well.

The singles represent the more confident side. I want to empower women. Like starting with my single from this album, “Breaking Point”, it’s the same women. Even though people don’t see the connect, I will make the connect for them. “Breaking Point” is made to empower women to get out of a bad situation. To understand you don’t have to tolerate this. That empowers women. “Pretty Girl Rock” is saying no matter what anyone says about you, no matter how much ridicule you may be faced with, you are beautiful. Don’t let anyone tell you different. And “The Way You Love Me” is like take control of your sexuality. Be who you are going to be and make no apologies. Its great to see a woman as free. I’m not an object in someone else’s video. Its me saying this. Its me doing this.

G. Valentino Ball: The new single Pretty Girl Rock feels like the female empowerment songs of a group like TLC. Where they a big inspiration for the song and the album

Keri Hilson: Absolutely! “Pretty Girl Rock” might have been like latter TLC, think of the first TLC with the controversial condoms all over their bodies. For that time that was very controversial. The visual was promoting safe sex but what they were talking about was “If I need it in the morning or the middle of the night/I aint too proud to beg”, you know. I need it. I want it. That was taking a very masculine approach. For that time it was very different. They were dressed like boys. There are women that think like that. There are women that feel like that. But it wasn’t without the control factor. And I think that’s what a lot of women gravitated towards and related to TLC. But think of Janet Jackson. Think of Madonna. Even recently think of Lady Gaga or Christina Aguilera. Those women took control of their sexuality and overcame the boxes that society placed on them. But that didn’t come without ridicule or criticism. They were called raunchy for a minute. It was unruly for that time. And Im not saying that I am that stature of an artist, I would obviously like to be. I think if more women see this feminine energy, visually, emotionally, sonically, they will learn to understand. Even if it shocks them right now in this moment.

G. Valentino Ball: When you got the call that you were going to be in VH1 Divas, what came to mind?

Keri Hilson: It’s an honor. But then when they told me about the troops and how we were supporting them I completely removed myself out of it. I was more honored to do that. And the soldiers confirmed that for me. They were like, “Thank you so much for doing this. Not a lot of artists take time from their schedules to come see us.” That confirmed for me how happy I was to do something like this.

G. Valentino Ball: I think that writing a great song is an incredibly elusive talent. What do you think prepared you or nurtured that talent?

Keri Hilson: It kind of happened on accident. I was taking piano lessons. I always loved to sing but I never really had written a full song. I had a piano teacher. But piano for me contained a lot of math and a lot of correctness. I liked to create. I don’t like someone telling me I’m right or wrong. So I valued the artistic expression as I do now, even then. Recital came up and I sort of manipulated him to play while I sang. So he is like “You don’t know how to play a full song but I will let you sing. You have to play as well. You have to compose the music and write it in its entirety”. Which I did do. I wrote the song and performed that for the recital at 12 years old. My mother knew someone that had a recording studio who could slide me into someone else’s session at the end of the night. They allowed me to go in. I vocal produced. I played the music and recorded it.