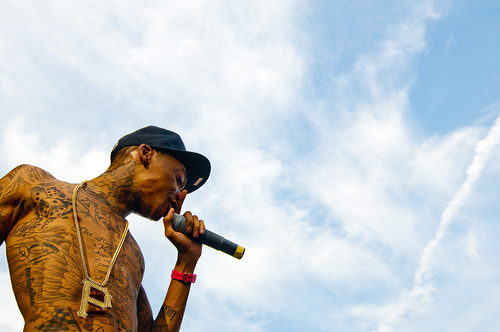 With a multi platinum single and respect from OG’s like Snoop Dogg seems like sky’s the limit for Wiz Khalifa.

This guy Cameron Thomaz is focused. Better known as rapper Wiz Khalifa, he has gone from internet sensation to a number 1 record with his double platinum single, “Black & Yellow”. And with a ferociously loyal fan base, The Pittsburgh native has carved out a promising career in an increasingly ugly music climate.

Like his peers Curren$y and Big Sean, Wiz has taken his internet buzz and catapulted to the big leagues and a new major label deal. But Wiz has been here before. An earlier stint with Warner Brothers resulted in a parting of the ways over his creative direction. But that break might have been a blessing in disguise. That break was the start of him building his buzz on the net. And now the buzz for his laid back weed influenced raps is so loud that he felt comfortable turning down an opening slot on Drake’s latest tour and a spot on Rick Ross’ Maybach Music Group roster.

The accolades keep coming. A renewed hall pass into the WEA building, with a new Atlantic Records deal. A performance of his hometown anthem at the Super Bowl and covers from Fader (along with a tongue touching pictorial with girlfriend Amber Rose) Rolling Stone and Hip Hop bible The Source are calling him the Rookie Of The Year. Now with veterans like Snoop Dogg and Too Short in his corner supporting his movement it seems like it’s time for the former XXL Freshman to step fully into the spotlight.

G. Valentino Ball: Even though Pittsburgh is in the North, I’ve always gotten a southern vibe from there. What’s the musical vibe like there?

Wiz Khalifa: Its always had a southern or mid west vibe. Just like with how heavy the drums are and what we like to listen to. We listen to everything. That’s what made my style. That’s why I like my beats real heavy but they gotta be melodic like on some mid west shit. But when I rap its hella lyrical. Not too mant words but you can tell I take time with my lyricism. There’s elements from everywhere. And people say I have a west coast vibe on how I talk or whatever. So they getting a little bit of everything. The sound is spreading and catching on cuz its easy to be down with.

G. Valentino Ball: I definitely hear a little of DJ Quik because of the actual sound of your voice. I also hear a lot of Bone Thugs & Harmony.

Wiz Khalifa: Totally. Those are two very accurate ones. I get those all the time. DJ Quik or Too Short but of course Bone. Them being from Cleveland and that being so close to Pittsburgh.

G Valentino Ball: What is it about your relationship with your fans that makes them so diehard?
Wiz Khalifa: It’s because I’m so interactive with my fans. It’s like one of them made it. Its as if I’m a fan rapping. So there are fans of a fan. And that support, just makes me want to go harder and be more creative for them. Just make new stuff for them to be happy and positive about.

G. Valentino Ball: What kept you in motion after the end of your first deal? A lot of artists would have been lost without the label support.
Wiz Khalifa: I always had a lot of material so when we left Warner it was nothing to keep recording and building on the sound that I had. Then I really incorporated the internet to have the visuals to go with it. That was around the time that Twitter came on too. Those things helped me keep in touch with my fans. I was able to let them know what I was doing everyday instead of trying to come with a radio single (to keep their attention).

G Valentino Ball: That takes some business acumen. Has your rep as a supporter of the environment and lover of trees ever hurt you in business?

Wiz Khalifa: (Laughing) Not really. When it comes time to business everyone who I work closely with or who sees my work, they see how professional I am. They see how much I go hard. They see how no one has to tell me to do stuff. When I’m handling business, its straight business. As far as the trees, that’s just a part of who I am. I think maybe the public could probably get that perception but anybody that really knows me, knows better. From the people at my label to the people at Atlantic, they know I am hands on with everything. Nothing slips past me. We all bounce ideas off each other so we can make the project the best it can be.

G. Valentino Ball: How important was for you to be the driving force behind your project?
Wiz Khalifa: It’s not anything that I have had to stress. Working through the years they have seen my track record. They see that I know my fan base so they put that trust in me. Same thing with my independent label. They know when its time to deliver I am really good at that. The best comes from when I’m able to do what I do and then bring it to them. And then we polish it up from there.

G. Valentino Ball: You always have your own self contained unit. What’s your vision of Taylor Gang as a business?
Wiz Khalifa: I’m always working with my artists and expanding the brand as far as Taylor Gang goes. Like I always say, “Everything takes time.” I want anyone associated with me to be able to stand on their own to the point where I don’t have to be all out in the front and they can have their business handled. This whole thing with me being in the game and getting more exposure is all going to trickle down. We are just making use of everything that we have. We are looking forward to the future as well.

G. Valentino Ball: A bunch of your peers are making moves as well. Who are key people you want to make sure you connect with?
Wiz Khalifa: Definitely Curren$y. Big Sean. People like Nipsey (Hustle). Those are people that I have met and valued my relationship with and want to be cool with. Doesn’t matter if we are doing business or not.

G. Valentino Ball: You made it a point to maintain your independence in your career. When Drake offered you the chance to tour you respectfully told him no thank you. Why was it important for you to stand on your own?
Wiz Khalifa: It was nothing personal or anything like that. Even though it was just a few months ago, I was till way earlier in my career. It just wasn’t time for me to do anything like that. I was still putting the pieces together to my own project and building everything. We had put so much time into getting to that point it felt like the best thing to do would be just ride it out. It ended up working out. My tour did pretty well and I’m still cool with Drake. He didn’t take it personally.

G. Valentino Ball: Was that the thought process behind turning down Rick Ross’ offer to join Maybach Music?

Wiz Khalifa: Yeah. It was something that took long to think about either. Because I know what I’m doing at this point. Even though it was a honor for those dudes to extend their hand, I had to finish up what I already started.

G. Valentino Ball: With the stardom there has been an increased interest in your personal life. Was that something that you were prepared for? What do you think of having the spotlight on that part of your life?
Wiz Khalifa: Its cool. If you think that you are going to reach success without people trying to be nosy and make your personal business their business then you are in the wrong business. As far as me I have always been a clean dude as far as staying straight and not getting in too much trouble. So anything that people are being nosy about is just them being nosy. Its not going to be anything that is going to change people’s opinion about me. I like to keep it like that. As long as I do then I will be straight.

G. Valentino Ball: You talked about working with Snoop and Too Short. Who are some of the people who you the best advice?

Wiz Khalifa: The best advice came from like Snoop and Too Short who have been in the game for years. Snoop’s album is coming out and Too Short is on my album. They said to stay relevant and to stay in people’s faces. Just always be working. And that’s what I’m doing