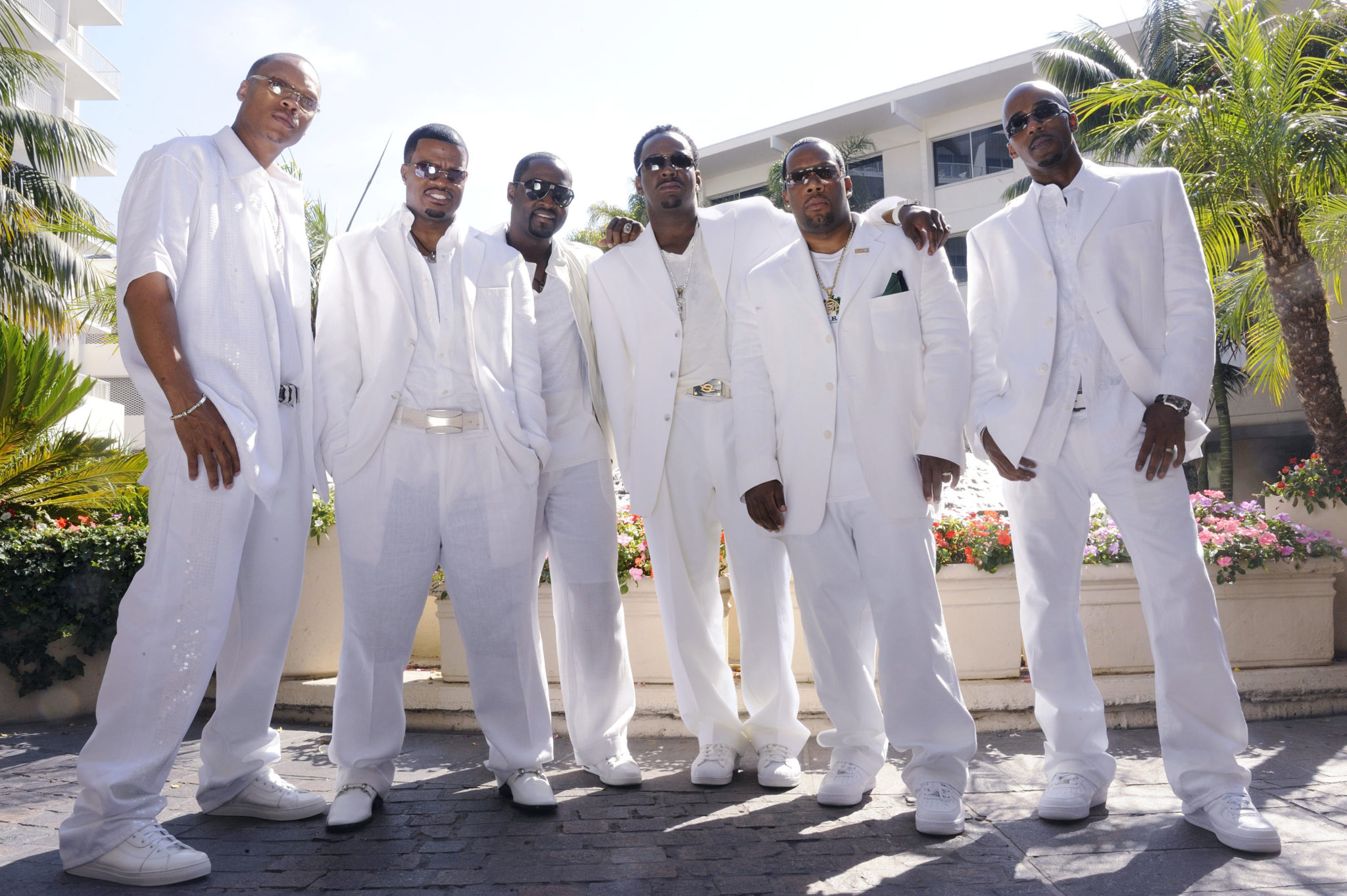 New Edition is home again. At the Boston preview of the miniseries about the R&B group’s genre-changing career—the New Edition Story, airing for three nights on BET later this month—the vibe is more like a family reunion than a movie screening. The camaraderie is fitting, seeing as group members Bobby Brown, Ronnie DeVoe, Michael Bivins, and Ronnie Bell move through the crowd greeting actual friends, cousins, and aunts who are here to preview the dramatic TV version of a saga they know first-hand (remaining members Ralph Tresvant and Johnny Gill were absent from the homecoming stop on the promotional tour).

To make things official, Mayor Marty Walsh is present to honor the group’s 33-year-long career and to declare the eighth of January “New Edition Day.” The boys from the Orchard Park projects in Roxbury have done good. The day before the series debuts, all six members will be in Los Angeles to receive a star on the Hollywood Walk Of Fame.

Respect for New Edition should be born from more than simply hometown pride. Likewise, it’s important to look past its teen heartthrob beginnings. In the bigger picture of contemporary pop music, New Edition is the bridge between the classic Motown R&B of your parents and the hip-hop generation. From its breakout 1983 hit “Candy Girl” to the megahits of the collective and their subsequent spinoff smashes like “Poison,” members of the band were the lifeblood fueling a burgeoning hybrid genre’s pop music takeover.

Notably, they didn’t just do it collectively. Long before side projects and solo careers for everyone in popular groups became the norm, Ronnie, Bobby, Ricky, Mike, Ralph, and Johnny separated and still dominated charts throughout the ’90s, like Wu-Tang Clan with dance steps. Solo projects from Tresvant and Gill were mature for the grown and sexy crowd, while Brown’s chart-topping releases plus projects from the remaining trio Bell Biv Devoe served as a one-two punch that wedded rap and R&B once and for all. Along with that was the run that Bivins had as the mogul behind Another Bad Creation, 702, and one of the best-selling acts of all time, Boyz II Men. And don’t forget that their nascent career was a crib sheet for original producer Maurice Starr to reference for his next Boston export, New Kids On The Block.

The BET miniseries covers the gamut, from turmoil to triumph. It’s all here. From New Edition’s start in Orchard Park outside of Dudley Square to the bandmates voting resident bad boy Brown out of the group to their reunions over time. This is not another hack job like the Lifetime biopics disgracing Whitney Houston and Aaliyah. Rather, the New Edition Story is a classy production that will inspire hometown pride on par with the recent N.W.A. biopic Straight Outta Compton.

Having grown up in Boston while New Edition was making its mark, I lunged at the opportunity to connect with members of the group, as well as key players from behind the scenes of their career and the upcoming BET series, for a more detailed glimpse of one of the most prolific family trees in music history, in Boston or anyplace else.

RICKY BELL (founding member): When we started off singing, we just wanted to make the girls scream and make a little money. That’s as far as our ideas went. And now 33 something years later, we’re making a movie about our story. It’s like, wow … how do you even plan for something like that?

STEPHEN HILL (president of programming, BET): I was in college radio in Providence when [New Edition manager] Maurice Starr brought us “Candy Girl.” I believe it was the summer of ’83. He said, “They’re out of Boston and they are going to be big.” I’m a huge Jackson 5 fan. So I was like, “Got it. Understand what this is.”

GEESPIN (Hub radio personality, current assistant program director/music director Power 105.1 in NY): When hip-hop was just getting started moving, they were the boy band that was moving with it. They were in [Def Jam founder Russell Simmons’ biopic] Krush Groove. Promoters wouldn’t book hip-hop shows but they would put New Edition on there to kind of balance it out. They had the Motown soul but they had the streets.

RICKY BELL: We were given our name by [choreographer and original manager] Brooke Payne … that was the reasoning behind it. We were going to be a New Edition to the industry … and at the time we didn’t really know how far, how deep that meaning goes.

STEPHEN HILL: The city helped raise them. The city in the form of Brooke [Payne] and their mothers, the support that happened in the talent night community was really important to their growth.

GEESPIN: If you look at their early videos, they were wearing what the streets were wearing. They would dress up and do that stuff but they were all … in front of what everyone else was doing.

New Edition – You’re Not My Kind Of Girl

BROOKE PAYNE (choreographer and original manager): They always spoke about not having their accolades. My reply was always, It’s coming. It’s in God’s time.

RONNIE DEVOE (founding member): I think it took us a little bit to pay our dues as New Edition, a bit longer than we anticipated. After album two, we were like, can we get our just due? Nobody was really recognizing some of the accomplishments, some of the trendsetting that was going on with us as an entity. You start breaking it down.

STEPHEN HILL: [People in Boston] wrapped their arms around New Edition when they came up.

GEESPIN: If you look at the legendary R&B groups of all time, New Edition is in that conversation. The Jacksons obviously had the biggest superstar in the world. But if you break out the individual careers, they were all successful. Bobby had a huge career. Johnny had a great career. BBD had a great career. Ralph had success. None of those other bands can say that.

RONNIE DEVOE: You get to see [Bobby Brown]. Then Johnny, Ralph, and Bell Biv Devoe. Then we wrap this thing back around and you get the [1996 album] Home Again where we posse back up. Even still around that time when they mentioned who’s who in the industry, New Edition wasn’t at the top of people’s tongues as far as just accomplishments and being groundbreaking.

STEPHEN HILL: We had a great relationship when I was program director and morning personality at WILD [in Roxbury]. Keep in mind the station is literally 200 yards from where they grew up. BBD came and played their music for us first. They were just finishing the [final New Edition tour for the 1989 album] N.E. Heartbreak. They brought the “Word to the Mutha!” remix video back here … Bobby [Brown] would come to the station with “Don’t Be Cruel.”

New Edition – Can You Stand The Rain

GEESPIN: We are from Boston so we kind of get it … But what I’ve come to realize is that other people do get it. You don’t always know if the rest of the world is with you on this.

RICKY BELL: Today, I don’t really know where that inspiration is coming from for a lot of new artists … I don’t think even half of them know our music or history or anything like that. We’re not offended by it, it’s just that when we were growing up, our parents introduced us to great music. I would hope that this movie does shed a lot of new light in telling our story, what we meant to the music business …

We want to share our stories as well, not to be recognized as far as who did this … What’s really important to us is to share that experience and hope that it will inspire and teach anyone following after us. The do’s and the don’ts and what can be accomplished if you work hard and stick to it.

MICHAEL BIVINS (founding member): [Boston attitude has] been a part of our resilience because even to this day, we still striving for some stuff … We’ve been a little bit overlooked … what we do is we take it out on that stage. The music community, that’s our home right there. We feel like as long as we’re putting people in the seats and we’re on stage and we’re doing our music, nothing else really matters.

GEESPIN: Bobby influenced Usher, Chris Brown, Trey Songz, and all of that generation. And BBD completely changed the game. They broke out of this thing when no one else thought they could do it to have arguably the biggest record of them all. “Poison” will go down as one of the top 20 records of all time.

New Edition – If It Isn’t Love

STEPHEN HILL: This is a story not just about New Edition but about Boston.

MICHAEL BIVINS: This movie is like the Celtics, the Red Sox, the Patriots, or the Bruins winning a championship.

RICKY BELL: It’s crazy because we started the process about 10 years ago … Even though it took a while, at the same time it seems like it’s happening so fast. So there’s a part of you that’s so hands-on, you want everything to come off right … you want people to see you in the right light. But at some point, you kind of just have to let go and just have to trust the process, trust the directors and actors … and just enjoy it … this moment only comes once in a lifetime if you’re lucky.

MICHAEL BIVINS: [Bobby Brown] was a little hesitant in the beginning [of the movie planning] … He came aboard a little later. Sometimes you have that dynamic that holds things up … Ten years ago, we were with Paramount and we were going for a two-hour movie. By [Brown] not being there and pushing that through, it allowed us 10 years later to go back to BET and stretch it out two more nights—so instead of two hours, we’re getting six. That’s one of those hurdles where you be like, Man, I was a little mad at you then but I ain’t mad at you now … Once again, a trip-up turns out to be a blessing in disguise.

BROOKE PAYNE: It’s an honor for me to see them as kids and now as grown men with children themselves, one of them with a grandchild. Some of us in life are chosen. These guys are chosen to live the life that they lived. There’s a part in the movie where I got fired. That back then didn’t bother me, because what was more important at the time was that they continue. If I never came back again that was fine because I would have seen that grow. They are something that kids can look up to and that’s what I am proud of most.

STEPHEN HILL: It’s not [a story of] them against each other but it’s how the music business took care of five very talented but very impressionable kids who didn’t know the business well. So it was how that really fractured them and broke them apart but their brotherhood was strong and brought them back together.

RONNIE DEVOE: Whitney Houston had a movie, one night. Aaliyah had a movie, one night. We look at some of our idols. The Jacksons, two nights. The Temptations, two nights. New Edition is three nights because of the depth and the history that we have. So we feel like, we had to wait for our just due and to kind of be a part of that tribe. It’s a sweet situation, better late than never, and we are happy that it’s finally coming around.