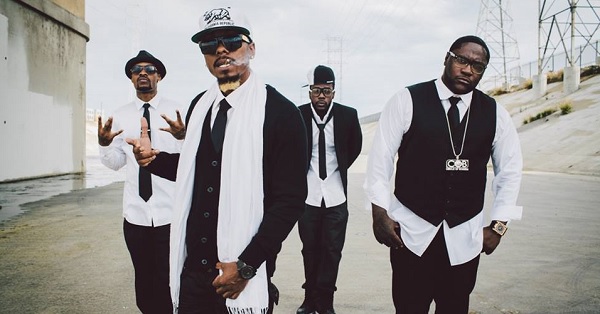 The “group” dynamic in Hip Hop is a tricky equation. It’s always been this way, and for good reason. Think about it, you have multiple artists with multiple personalities spending a large majority of their time constantly surrounded by each other. From Wu-Tang to ATCQ, the headaches that come with this territory are just how the cookie crumbles. Before diving in to setting your career template up this way, you really have to believe and trust in the guy’s your bringing on board with you. Aside from having talent, smarts and drive, the chemistry must be there as well – all in equal form. I mean, if one slacks in any area, that’s a reflection on the entire clique. Thankfully, every now and then the Hip Hop stars align and this perfect formula proves it isn’t just a myth.

Horseshoe Gang is a Hip Hop group comprised of four brothers, who all happen to also be the biological brothers of infamous Slaughterhouse lyricist, Crooked I. I recently had the pleasure of speaking with Demetrius (leader of the pack, if you will) about the group’s name origin, overall goals, writing/performing strategies and the three most important things for aspiring Rap artists to abide by.

Who are you and what do you do?

Demetrius (HSG): We are Horseshoe Gang and what we do is a little bit of everything from chewing other rappers’ faces off to making music you girl gon’ rock to, you feel me? We are about putting out quality music, first and foremost and no one can out work us. Just last year we were putting out a mixtape a month in a series we had going called “Mixtape Monthly” and each tape had a different theme to it. We’re just some hard working, Rap cats that are trying to bring it back to the essence

What do you hope to do with your music? What’s your real passion and why are you doing this as a career?

Demetrius (HSG):You know, a lot of rappers might set out for financial gain or to be considered one of the best rappers our right now; we are trying to be the best Rap group of ALL-TIME. We know that’s a tough feat but we’re up for it. I’ve been rapping, literally, since I was three – that’s over 25 years, you know what I’m sayin’? We are setting out to change the course of Rap and really change history. That’s our goal – to be the #1 Rap group of all-time.

Where did you come up with the name “Horseshoe Gang”?

Demetrius (HSG): Back in the day, our older brother King Crooked (Crooked I), he called us “The Untouchable Gang”, you know. Then, we’d shorten it to, you know, “U-Gang” and we’d wear those Colt’s hats, you know with the horseshoe “U” on it? That stood for “Untouchable Gang”, but since the hat had a horseshoe on it we just started calling ourselves “Horseshoe Gang” and that just stuck.

I just heard your latest single, “F.O.E.” with Royce, and loved it. I personally love when rappers can put aside the cliché “tough” façade and just be real. Those are my favorite artists to follow, the ones who I feel like I can talk to, freely. This song is uplifting, motivating and relatable. What was the inspiration behind this particular track?:

Demetrius (HSG): You know, when it comes to Horseshoe Gang man, we are really about the realness. We promote being real and drawing from real life experiences and when we grew up – we really struggled. We grew up with a poverty-stricken life and when it came to our family, those were the only people we could trust. It made us stick together, going through such trials and tribulations so…that’s what that song’s about. F.O.E. = Family Over Everything and, your family doesn’t necessarily have to be your blood, it’s whoever was in the trenches with you. You feel me? Family over everything.

On your latest EP, “Knocking On Rap’s Door”, I immediately noticed you guys had bars, and all four of you stand out individually on each track – which is an extremely challenging element for group acts. Did you get any pointers from the Slaughterhouse crew on how to tackle this, or did it come naturally?

Back when I was a teenager (I’m 29 now), the game was formatted much differently than it is today. As a new/young crew coming up in modern-day Hip Hop culture, what would you say are the three most important things for aspiring Rap artists to abide by?

Demetrius (HSG): Definitely one would have to be “focusing on changing with the times and remaining relevant (as much as you can)”. You can’t get stuck in a certain era just because you ain’t got on yet. That’s one thing. Then also, “never give up”. Definitely – don’t ever quit. Don’t ever let anything be an obstacle in your way and also like I said, it’s “family over everything so ride whoever it is that’s down witchu”. Whoever been down witchu since day one, ride with them.

Before we wrap up, let me hear what your favorite album is (from any genre), as well as your all-time favorite movie. Tough, I know, but I love asking this one. Haha.

Demetrius, Julius, Kenny and Andrew “Dice” are Horseshoe Gang, and they’re here to stay. Longevity is their goal and that extended mentality combined with their level of (individual and group) talent makes it easily attainable. Checkout everything Horseshoe Gang on their website, horseshoegang.net, and be sure to grab their latest EP – “Knocking On Rap’s Door” – if this interview has you interested in hearing more.