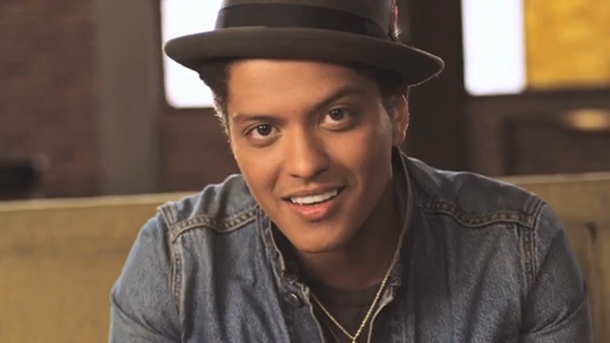 Bruno Mars is ready for the spotlight

After cranking out hits for B.o.B , Travie McCoy Flo-Rida and Cee-Lo Green all summer, Bruno Mars steps out on his debut album, Doo Wop & Hooligans.

Performing has been in Bruno Mars’ family for as long as he can remember. “I was onstage doing six nights a week in Waikiki at 4 years old as part of my family’s act,” he says. “That’s where my heart is. I grew up doing that.”

With such an early start, it was only a matter of time before he took center stage. Armed with a stage name inspired by his father’s favorite wrestler, Bruno went to L.A. after high school. And as part of the production team The Smeezingtons, he has since been mining chart gold with his melodic doo-wop-inspired R&B for a variety of artists.

Now with a No. 1 hit to call his own (“Just The Way You Are”), he’s ready for the spotlight with his debut album, “Doo-Wops & Hooligans,” out this week.

Our 50th state isn’t exactly known as hot bed of music. How does a guy who grew up in Hawaii end up at the top of the charts?

(Laughs) It might sound corny but a lot of damn work. I hustled and hustled for so long out in California. Meeting the right people. Getting in the studio. Fakin the funk. Pretending that I’m a producer and a writer just so people could hear me sing.

But you have number one song production and writing credits.

(Laughs) I do. But I didn’t come to California to be a producer. That never even crossed my mind. I wanted to be an artist. Like you see in the movies, you come out to get signed. You put out an album. You’re doing shows everywhere. Thank God it didn’t go down like that. Because throughout that process I learned how to produce. I learned how to write. That’s what I meant by faking the funk. Because that was never the goal. The goal wasn’t I’m going to move to California and be a producer. The goal was I’m going to move to Cali and do my own album.

Bruno Mars – Just The Way You Are

You said your work as a producer helped you with your album. How so?

Being able to put a song together. What makes a chorus a chorus. What makes a verse a verse. What makes a hit track. That’s what I learned throughout my little journey. So when it was time for me to make my album I already had this knowledge. I’ve been lucky enough to be working with great writers and producers. And everything I learned along the way I put in my back pocket.

Your musical journey started when you were very young. Was this something that you did and you grew to like or were in love with performing from the start?

I was doing six nights a week in Waikiki at 4 years old. That’s where my heart is. I grew up doing that. In front of that live audience. And now we are doing shows and people are singing the songs back. That’s the reason why you want to put out an album. At least for me. So I can hopefully be successful doing that.

The thing that can drive you crazy when youre writing for someone else is making sure that they are going to want to say that (which you write). As opposed to writing for yourself I can say whatever the hell I wanna say and that’s what I wanna write. So you have to tippy toe a little bit. Say you are working with a female R&B singer for example. She might not want to say certain things, so you have to respect that. But its also a blessing and a curse because youre writing for a female R&B singer. You get write a ssong you would never write for yourself. But being a fan of an Lauryn Hill, Alicia Keys or a Beyonce, you can kinda get into that world and write from that aspect.

Of the success that you’ve had so far when did you feel like you made it?

Aww man. I got a lot more to go. I’ve been very fortunate to have success with these songs. Doing records with Travie McCoy, B.o.B and Cee-Lo Green and now my own song is taking off. Man this is the very beginning. My album is not even out yet. I’m looking down the line. 5 years from now maybe I will know then.

You have some pretty heavy people cosigning you. How does that make you feel?

It makes me feel happy. I’m fans of them and I think they know that. I study the best artist and watch them to see how they do things. I’m still a student and I’m trying to learn as quick as possible this whole game. The cameras being on everywhere you go. You gotta be on and be ready.

Has being “on” become a stressful thing?

Not every day you can be on and everything is ok. But at the end of the day this is what I wanted. I want hopefully the world to accept my music and come to the shows and see me perform live. If that’s what I gotta do to make that happen then I will do whatever it takes.

When you were a kid what was your vision of success and how close are you to that?

I get that a lot. I don’t know where I wanna be or where I’m gonna be. I know I do want to be happy doing music and I think that’s success. So if I’m making a dollar or making millions as long as I’m happy doing music and I’m feeling this joy I get when I create a song then I am happy. That happens I’m the most successful man on Earth.

You have been doing a million interviews. What is the dumbest question you get asked on the regular?

They aren’t really dumb. I wouldn’t say it’s the dumbest question. Just personal. All the personal questions. That’s another that youhave to get used to. People really wanna know about you. You think you are signing up to do music and people will ask you about your music. It gets a little weird when people ask about the personal. Truthfully that’s all I have. My home life. My family. My relationship. I find it puzzling that people want to know those things.

But when you were a kid growing up didnt you want to know about the personal lives of the stars?

Truthfully not really. I really don’t care. I don’t care that Prince doesn’t have a Twitter. (Laughs). I want to think Prince is waking up in the morning and eating diamonds and about to take a ride on a majestic pony being Prince. I don’t wanna know if he is at the Gap and he got some khakis. (Laughs). I like the mystery. I like the mystery of when I see a show. Now everyone has their camera phones out and your show is on YouTube in an hour. I didn’t have that as a kid. That’s something I guess I gotta get used to.

Considering all that, isn’t it the challenge of being an artist these days? Doesn’t that force you to constantly change it up?

That definitely sticks with me. I don’t want people saying “I could have stayed at home and Youtubed this.” But fortunately when you come see a Bruno Mars show its always different. We always like to flip our songs up. But as an artist you always have to evolve. If that’s where the times are going you have to understand that.