How silly is it for World Wrestling Entertainment to make like the tweets of the WWE Universe mean so much, that they would have an affect on the programming itself? Earlier Monday, the WWE’s Twitter account announced the return of Shane McMahon due to overwhelming requests from the fanbase. OK. So all we had to was ask? He didn’t have to almost die from the suicide dive off the top of the Hell in the Cell? Noted.

Raw was live from the home of Kobe, the Staples Center in LA. While LA fans prepare to say farewell to one of the greats, they welcomed with a resounding roar Shane McMahon. Shane was cracking heads as usual with the custom Jordans and the business casual look you’d expect from the descendant of old money with new ideas. It was those new ideas he touted as he thanked the Universe for demanding one more Monday with Shane. He promised to make new stars and granted Sami Zayn another opportunity to earn a shot at the WWE World Heavyweight title in a match with current number one contender AJ Styles. It didn’t take long for someone else’s music to hit the house speakers and that someone was wrestling’s Winnie the Pooh, Kevin Owens. In perfect Owens fashion, he completely ignored the fact that he did not win the Fatal Fourway last week to earn a shot at Roman Reigns at Payback. It was mentioned but he moved past that to demand he be able to invoke his rematch clause. Shane ignored the demand and told him to earn it by beating the Swiss Superman, Cesaro.

Fatman vs Superman
What a match to kick off the action for Monday’s Raw. I can’t say enough good things about the current crop of talent. We’re seeing an upping of the ante, and if the vets can’t keep up, they will (and should) start moving towards the door. WWE could have used WrestleMania to really establish that but…never mind. While Cesaro still doesn’t appear to be 100%, he’s giving everything he’s got out there. The story was the recovering shoulder that was marked by the black kinesio tape. When he went for the Giant Swing, he looked like he really could not get it. Either that was great selling, or he’s still really sore. That along with the slightly doughier physique of Cesaro leads me to believe he isn’t at his very best. But it won’t be long. Owens looked like Bam Bam Bigelow version 3.0 out there. It’s unfair the way he’s able to move about that ring. He hit a Frog Splash that looks like it flattens your insides. Gone are the days of, “You’re too big to be doing that.” KO can do whatever he wants. With that said, he lost when Cesaro reversed a Pop-up Powerbomb into a Neutralizer. The win puts Cesaro in line to face the Miz for the Intercontinental Title.

When it Reigns it Pours
You can’t help but wonder what the WWE is playing at when the announce team starts to acknowledge the boos raining down upon the head of the WWE World Heavyweight Champion Roman Reigns. Again, this week the boos were not muted. In fact, were they turned up a little? Or has he been getting this Vicki Guerrero-level heat since last year’s Royal Rumble? While I hope this is the beginning of a beautiful heel turn, I doubt it. Reigns reassured us he’s not bad or good (or a little teapot short and stout I’m sure). The League of Nations interrupted a promo that I’m sure was going somewhere to lament the fact they weren’t in the title picture. Guys, you’re fresh off a loss for the tag titles last week. I don’t think they’ve explained to the boys how wins and losses and standings work. It would not be long before Bray Wyatt showed up and helped Roman clean house. Oh no. The guy who quotes the Satanic parts of the Bible is turning face? Okay. Didn’t matter to Shane McMahon. He popped out on the ramp to say how much he liked the new look of Reigns and Wyatt and made the main event where they would face the Nations. Stuff is just happening. I’m still waiting for a reason Bray attacked the League of Nations. Why on Earth would he align himself with Roman Reigns when he just waged war on him like…a feud ago. Anybody else remember, “Anybody but you, Roman.”? I know. Why do I bother? It would be different if Reigns had shown him some kindness from before or something. But things apparently just happen.

In the match itself, Ro and Wy worked pretty well together. It was pretty seesaw, as everybody in the ring has main evented before, so no one was really a weak link. It was odd to see Bray get a hot tag and take over the match. The flying elbow (or car accident elbow as I call it) never looks like it doesn’t kill the guy Bray hits with it. When Rusev stuck his nose in the match, the lights went out and the Wyatts appeared and let the dogs loose on Ru. Rowan and Strowman came through with the old fashioned Southern Justice beatdown. Meanwhile, The Wyatt patriarch was in the ring hitting Del Rio with Sister Abigail while Reigns cleaned up with Sheamus with a spear. The show ended with an ambiguous staredown that would show neither harm nor handshake from one party to the other. 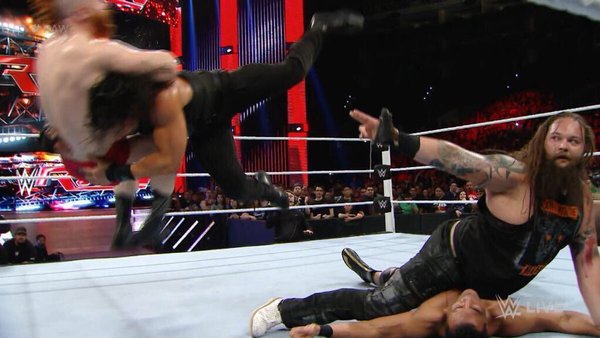 What I hope is not happening is some kind of weird Odd Couple match up in which the front office is still looking to get Roman over by association with Wyatt. At best, I could see a couple of the boos getting diluted as long as Broken Out in Love plays. What would be fun, is to see Bray maybe corrupt Reigns and get him to give into that dark side he claims not to have. It would make a boatload more sense and would fit more the devil kind of character of Bray Wyatt.

On to the good stuff

Bruh.  This match.  Bruh!  I can’t believe this was in the middle of the show!  They took a dump on anybody who had to follow that.  Looking at you Reigns.  How many moves does AJ Styles have?  I know it’s like a million.  He reminds me of an SNK character with all the inputs it would take to properly use him in a videogame.  Just when you thought you would be able to call the spot, they did something different and way better than what you thought they’d do. How many matches is Sami going to lose though?  While I am no fan of the Triple Threat match, I’m about ready for Sami to catch a break.  Is he always going to be in match of the year candidate matches?

The Unicorns announced that since they’ve vanquished every opponent set before them, a tournament would be held to name a new contender. After the promo, they took a well deserved break and watched the games begin.

The two matches that evening saw the Dudley’s beat the Lucha Dragons and the USPS advance over the Social Outcasts. However after the Uso win, Luke Gallows and Karl Anderson made their debut by beating the brakes off Jimmy and Jey.  For fans of the Bullet Club, you just wanna see them get the band back together. While I don’t feel like anyone is worthy of dethroning the New Day right now (mostly because I never want the ride to end), the addition of Anderson and Gallows goes a long way to shore up the tag division.

It was just last week when Charlotte tried to undo all the momentum of the Women’s Wrestling movement by giving all credit to the Nature Dad Ric Flair.  I appreciate the irony and find the whole thing hilariously offensive.  Well one man couldn’t take it any more. One man stood up for the women of the WWE Universe. One man took on the mission of seeking out Flair and Charlotte to chastise them for their crimes against female grapplers of the past present and future. That man is-Dr. Phil? Honestly it wasn’t a bad segment. I just love how these celebrities get backstage access and make all kinds of interjections.  It’s the smarkiest thing I’ve ever seen.

The Women’s Title match was highly contested. Honestly it wasn’t mind-blowing, but it played on my emotions a little to see Charlotte try to pull off a Sharpshooter. But since the Sharpshooter hasn’t beaten anyone for a title in ages, I wasn’t too worried. Seriously, when did the most terminal submission hold of the 90s turn into the headlock? But just as I spoke too soon, there goes Charlotte tapping out to the Scorpion Deathlock. Sorry. I got tired of saying Sharpshooter. Dammit. However, Flair yanked the ref out the ring before the tap out could register, I guess. So the ref went with the DQ instead of the obvious, more potent way of punishing the Flairs with the submission.  Weird. Suffice it to say Dr. Phil was disgusted.  Especially after all that shilling he did for the Women’s division.  Dude. You don’t have to sell us on it. We were on board before the WWE was.

Man Talking to Himself Gets Committed to the Ambrose Asylum

Chris Jericho kicked off the Highlight Reel by introducing his guest, multiple time WWE Champion, World Heavyweight Champion and future Hall of Famer-Chris Jericho.  He proceeded to address himself and answer himself.  Just when the crowd had seen enough, Ambrose made his way to the set and started making alterations.  Armed with a letter from the temporary big cheese, Shane-O, Ambrose declared it the first ever Ambrose Asylum.  Clearly not willing to stand for it, Jericho went for an attack but was countered into a Dirty Deeds.  Because why talk when you could dump a guy on his head. I’ve said it before, but Dean Ambrose is the new age Roddy Piper.  He’s great on the mic.  Always seems to dressed to fight regardless of what he’s wearing.  He’s believable at bat crap crazy.  He doesn’t need a title to go over.  Hell, he doesn’t even need to win to go over half the time.  And now he has a pit.  Congrats on the new gig.

This week gave us a very strong show.  Yeah we got a big reveal in the Bullet Bros and some pretty high stakes matches.  But it relied a lot more on action.  More fans are about that action, boss.  And it looks like maybe, just maybe we get a break from the monologues and into what we came to see.  Not throwing the baby out with the bathwater, we still got promos from our favorites like Shane and The New Day, but even those got to the point.  I didn’t talk about it, but Enzo and Cass actually captivate the crowd when they talk, so keep it coming.  If we get another show like this next week and roll into Payback in a similar fashion, WWE can establish a habit.  A good one for a change.  I’m sure we’ll find something else to complain about, but that’s why Wrestling fans (Sports entertainment my Aunt Fannie) are the greatest fandom in the entire world.  Keep demanding the best, y’all.