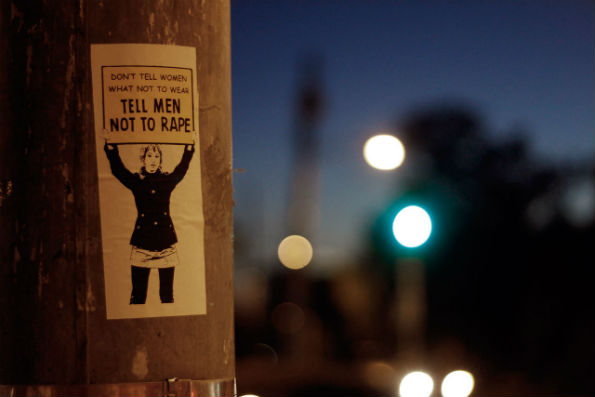 Rape. It is a serious subject to say the least. But is our society’s casual use of the word diluting its real meaning? Many women, men, and children have been raped and live with that terrifying memory every day. According to aspiringeconomist.com, 1 in 4 college aged women have either been raped or have suffered an attempted rape.

One story that I found particularly disturbing, is the case of the 7th grade special education student who was raped by a classmate. She reported the incident only to be suspended for accusing someone of the crime, and was forced to write an apology letter to her attacker. Soon after the victim was raped again by the same attacker. Again she was expelled for “Disrespectful Conduct” and “Public Display of Affection.” It was not until her mother took her to get a rape kit and semen was found that matched the accused attacker, that something was done. The student has been charged and pleaded guilty. Tragic events like this one are happening too frequently and it makes you question people’s judgment. Why believe the attacker instead of the victim? What could she have possibly gained from lying?

Why did it take her being raped twice, and her mother to intervene for something to be done? Is it because rape is taken so lightly now that it is not seen as a serious crime? Or was it because rape is portrayed so frequently in media, that we see it as a social norm? In the face of stories and stats like this, are we taking the concept of rape too lightly?

A quick glance at the entertainment world would say yes.

In music, rape is used in many different contexts. I admit, I am guilty of getting lost in great beats and just listening to lyrics instead of analyzing them, but if one were to really sit and listen to the words of some songs, I think more people would be disgusted with the lyrics. Mac Miller says, “Ima rape the game, no wrap this burger,” in his song “Ridin’ High”. Tyler, The Creator uses rape constantly. He boasts quite frequently about his abilities to rape women, “I fuck bitches with no permission and tend to hate shit” in his song “Tron Cat”, and again in the same song when he says, “rape a pregnant bitch, and tell my friends I had a threesome.” While music is an art form, is there a limit to what can and should be said about rape? Can we change the perceptions around rape? Some people seem to think so and are doing something about it.

Women and men all over the world are taking a stand. They are standing up to the shackles and refines that the media has put on sexuality. Many victims and sympathizers are wearing the skimpiest of clothes and parading about in marches called SlutWalks. These walks are being held worldwide at various times. Women hold signs at these marches while exclaiming, “Still not asking for it.” and “My clothes are not louder than my voice!” They are calling for better educated people and people who will listen. SlutWalk NYCs website mission statement says, “SlutWalk NYC is part of a worldwide grassroots movement challenging rape culture, victim-blaming and slut-shaming, and working to end sexual and domestic violence.”

These outlets of mass media have distorted the audiences understanding of rape. Women, and men alike, are fed up with rape being just a word when there is so much more behind it. From this frustration, they are fighting back. We are a culture that ignores the true source of rape and instead, blames the victims. This currently happening in Brooklyn, after a series of unsolved sexual assaults occurred. A cop reportedly stopped women and warned them about wearing revealing clothes, in particular skirts. By doing so, the police officer was clearly victim shaming, blaming an individual for drawing “negative” attention to herself, causing her to be a target. We are a culture that tells people not to get raped, instead of telling people to simply stop raping. Instead of siding with the victims and helping them heal, we shower them in false shame when it should truly be put upon the rapist. We blame the outfits the victims were wearing or the flirtatious nature of the conversation that led to the rape. We are a country who has embraced Rape Culture.

Rape jokes are not going to go away, and neither is slut shaming, which is the act of making fun of a promiscuous woman, without people taking a stand. You too can make a difference just by eliminating the word out of your vocabulary, by simply not saying, “I am going to rape you in Gears” or “I am going to rape this sandwich.” Rape is serious.

So before you open your mouth and use rape out of context, think about the people around you and who you could be hurting.

Olivia Slaughter is a first year student at Lasell College, a freelance photographer, and also hosts a weekly radio show at radio.lasell.edu