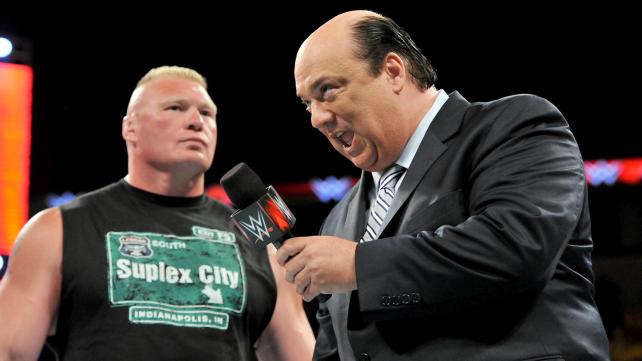 WWE.com has a poll that asks, “What is the biggest shocker of WrestleMania 32?” Short answer? Nothing. We all woke up Monday with a Mania 32 hangover. If you played the WM32 drinking game, you probably woke up in the ER after getting your stomach pumped. It all unfolded exactly the same way it does every night Pinky. Nothing ever changed, like…Pinky and the Brain actually. It was cool to see Zack Ryder get his (well-deserved) WrestleMania Moment. But the cynic in me just knows this push will be followed by another push off the stage in a wheelchair. I hope not, but I know better.

So if WrestleMania is Black Friday, Monday Night Raw is the Cyber Monday. Usually the show after The Show is better and has a lot more value and bearing on the WWE landscape going forward. It would be nice to move forward, seeing as how the Hall of Fame spilled over into Mania itself and the biggest winners were all retirees and old-timers. I’m just glad Scott Hall didn’t decide to join the Ladder Match or else he’d have won it. With Jericho, Shawn Michaels, Mick Foley, Steve Austin, The Rock, The Undertaker, Brock Lesnar and John Cena all going over on the young blood, it’s no wonder WWE can’t build new stars to carry Mania.

Speaking of building, somebody help WWENetwork build a new server. I had my feed interrupted more than a…someone who tries to eat, but can’t because events and circumstances keep interrupting his meal. This thing isn’t brand new. We’re way past getting out all the bugs. How about we cut out these commercials (on this service I’m already paying for)? They seem to be taking up some bandwidth, what with their length and pristine quality and ability play so smoothly.

The WWE decided to stay in Dallas for another night because…tired. The announce team started off the show telling the home viewers that they had a very raucous and varied crowd. This collection of WWE Universe members would be prone to chants of the ridiculous and cheer when others may jeer and vice-versa. So basically, representatives of the WWE fandom from all over the country (world) would be there. So when it came time to boo Roman Reigns, it would be clear that it’s not just a regional thing. This would be the world’s largest focus group. Let’s see how well the WWE listens.

You Got ONE Chance in Hell
Vince started the show with a “How bout WrestleMania??” and the audience, knowing they were being trolled, gave Vince an earful. An earful of boos. He expectedly gloated about The Undertaker beating Shane, but gave the Money his due as he applauded the efforts of Shane. Speaking of the Money, here he comes. Shane gingerly stepped out to the ramp revealing some bruises and his obvious inability to walk. He accused Vince of being something other than a man, but shook his hand to be a good sport. He thanked the Universe who rained down chants of “You still got it!!” Shane said his thanks and followed up with a goodbye. Then Vince, because he refused to be upstaged by a man with his hat in his hand and his head hanging down said, “Hey, kid! You really wanna run Raw, huh? Oh alright! Just this once. And make sure you sweep up before you leave.”

You Wanna Go, BRO?
So as soon as Shane is handed control of the show, Zack Ryder and the Miz get into a pissing contest. The Miz (wearing a Serpentor costume) challenged Zack Ryder for his newly won Intercontinental Championship (which by the way was won in a match in that featured Miz). So without a contract signing, WWE Sanctioning or even an OK from Shane-O Mac, these two squared off for the IC belt. Wouldn’t you know it? After having just given an impassioned-albeit corny-thank you speech to his dad, Zack lost his first title defense. His reign didn’t even last as long as Marty Jannetty’s. In all fairness, I’d probably turn my head if Maryse came out of the crowd. This is no way to treat the man who started the WWE’s social media surge. Oh, radio.

Ain’t No Brothas in Mayberry
New Day is basking in the glow of all their hard work. The audience turned them face organically. Even though I personally can not stand babyface turns on good heels (because they’re so hard to find), this works because it’s hard to hate these guys when they’re allowed to be themselves. If you’ve never watched Up Up Down Down, you’re missing out. While I’m glad they beat the League of Nations and retained the titles, I can’t help but try to count the number of times black people have won at WrestleMania. Even The Rock used to lose on the Grandest Stage, only to win the title at a lesser show. So why wouldn’t the most over stable in recent history not go over at the biggest show? It wasn’t even a loss for the titles. Just feels kind of petty. Stay woke.

Heel on Heel Crime
The Wyatts attacking the League (sans Barrett who should be getting his release soon) to establish that hopefully they ain’t playin’ no games no mo. More than likely it will be another pointless feud that will fizzle out by Payback and soon Wyatt will be back to jobbing for the stars. Who knows? It will moderately interesting to see how they explain the motive behind attacking the League of Nations, another heel stable. I thought we were at a shortage of good tag teams and the like. Face the heels against the faces. Unless of course WWE is going somewhere with this.

What the Hell, Ring the Bell
Speaking of tag teams, how awkward was it when the timekeeper rang the bell to end the tables match between the Usos and the Dudleys? Bubba didn’t even play it off. He was so unprofessional about it and it was so hilarious. Am I the only one who heard some shouting off camera? I’m pretty sure I heard a sleep deprived Vince losing his entire ish about that faux pas. Or maybe the timekeeper was trying to rush to the good part of Enzo Amore and Big Cass making their debut. They pretty much roasted The Dudleys into the ground. Their snaps were so palpable, you could see numbers come out of D-Von and Bubba’s heads (role-playing game joke +10 dexterity). I hope they don’t touch these guys at all. Just let the crowd move them organically to the spot they will deserve. These guys have the juice. And you can’t teach that.

I’m Not a Bad Guy
Is what Roman Reigns actually said at what was supposed to be his coronation pretty much. I think Vince is still beside himself at the fact that people just don’t want Roman Reigns as their messiah. It’s not like he isn’t talented. It’s not like he doesn’t have…serviceable mic skills. It’s not like he doesn’t have a great look. He was just forced on us. With that said, I think the boos from the crowds are ridiculous. I don’t even think the majority of the jeers are coming from people who are booing to be cool. Maybe it’s a combination of the old C.M. Punk comments, the lack of Daniel Bryan and well…reasons. For whatever reason, THE guy isn’t over with the crowd. As we all google how long it takes for an ACL to fully heal from surgery, let us try to be patient and give the guy a shot.

Party of Four..Five
Naturally with the crowning of a new champion, the hunter becomes the hunted. Reigns was joined by Jericho, Sami Zayn, Kevin Owens and AJ Styles all thumped their chests about how they deserve a shot. Obviously this led to a fatal four way, but on the way there, Sami Zayn was thrown off the trail by Owens. So as a sub, Shane McMahon provided us with Cesaro. This was worth the price of admission. Welcome back, Swiss Superman. Great match by the way with a ton of spots and close counts. It was encouraging to see AJ avenge his loss and beat Jericho with the Styles clash to become the number one contender.

Now that we have two faces against each other, let’s hope we’re getting a Reigns heel turn. He would make a much better monster than he does a babyface. He reminds me a lot of Kevin Nash as Diesel, but way more athletic. That is better than it sounds guys. Nash was a face in an era with zero good main event heels. Kev wrestled Mabel at SummerSlam 95. Mabel. A nice little beef with AJ and then a heel turn by Reigns to retain is probably just what the doctor ordered. And then…we could have the triumphant return of…never mind. Because if I say it, it won’t happen. I wish I were a booker. You wish I were a booker. But until that day, I’ll be right here Goin’ in Raw with y’all.