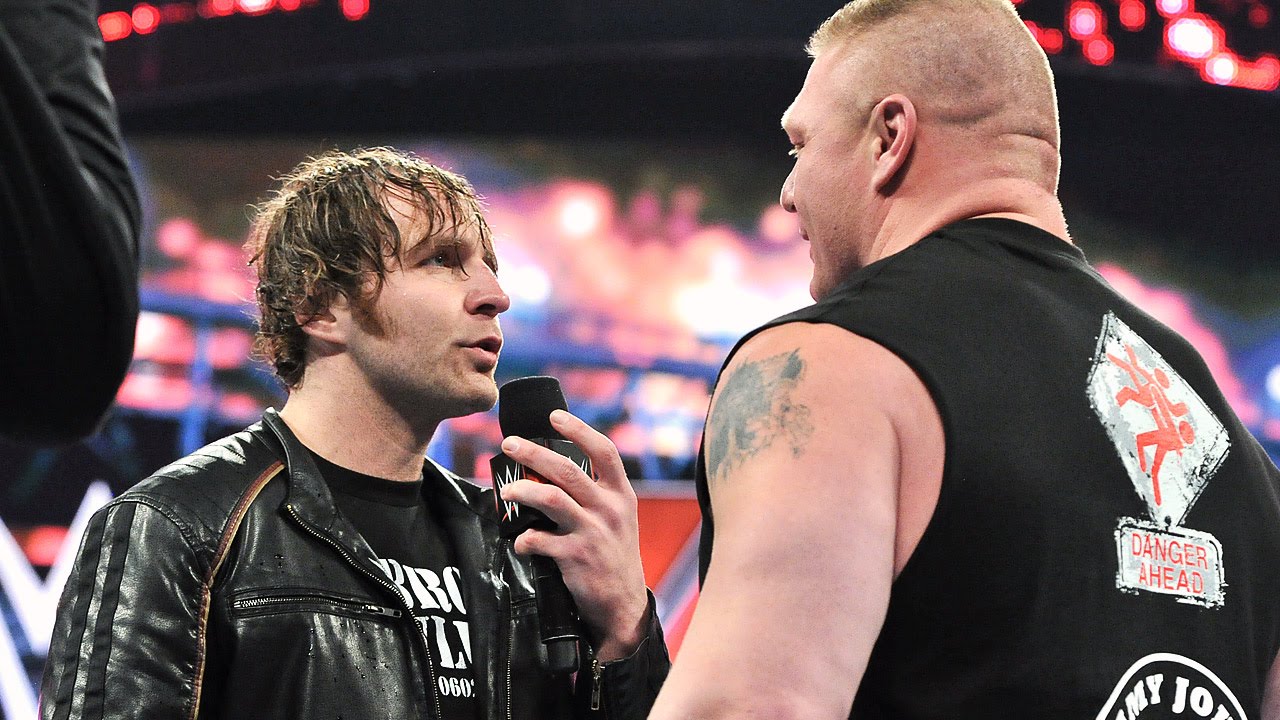 Going in Raw: Dr. King is Grinning in His Grave

WWE advertised a possible appearance from Brock Lesnar on WWE.com and at the top of the show, the Mayor of Suplex City made his way to the ring with his advocate, Paullllll Heyman. The artist formerly known as Paul E did his usual spiel about how Brock was gonna beat up everybody short of Galactus to get to HHH at WrestleMania. Then Dean Ambrose’s music hit and he charged the ring to let Brock know what kind of beating he prepared to take from not only Lesnar, but Roman Reigns as well. He must’ve been listening to Lil Jon. Ambrose looked like a moon that was caught in Lesnar’s orbit. He politely made his way back out the ring and the segment ended. It’s good to see the talk end around the thirteen minute mark. Hopefully going forward, WWE is looking to go with slightly less talk and a little more action.

Alberto Del Rio joined the three Amigos on commentary. There were a metric ton of mosquito references, which quite frankly I find offensive, what with all the Zika stuff. Stay woke dawg. Lana came out there looking like a raceplay fantasy. This was a decent match, but got a little corny when Rusev tried his hardest to sell the lucha moves that he should easily be able to swat…dammit, now I’m making mosquito references! The match ended when Kalisto caught Rusev with what seemed to be the thousandth hurricanranna that launched him into the well cushioned guard rail which was so comfortable, it made Rusev sleepy, so he took a nap and got counted out.

Stephanie and the Brothers in Arms

Roman Reigns and Dean Ambrose were chilling in the boss’s office, admiring the World Heavyweight title. It’s hard to tell if the were summoned there or if WWE has an open door, chill in my office policy. Steph tried to play the boys against each other by calling Ambrose the sidekick. Ambrose jokingly referred to Reigns as sidekick. The back and forth hit an awkward lull. Somebody must’ve whispered “Go home”, because they cut to the chase and Stephanie informed Reigns and Ambrose that they’d be facing The New Day. First day of Black History Month in Birmingham. Anybody else feel Dr. Martin Luther King smiling down on them?

Renee and Brie 9.99
Renee: Hi Brie. I hope your sister is doing okay after her surgery.
Brie: Hey. You can watch the WWE network for 9.99 a month.
Renee: Word.
Suddenly, Charlotte butt in to say stuff. Basically to gloat and fake apologize for injuring Nikki Bella. Ric Flair was silent. I never thought I’d see the day where it a silent Flair would be a good thing.

The Usos vs The Social Outcasts

Okay. Fine. Lillian Garcia messed up. But when did WWE start replaying mistakes and flubbed lines? Isn’t the point of a production as intricate as Raw to hide the seams? Why take attention away from the story of the match by poking fun of the ring announcer? Save it for a YouTube show. The Social Outcasts walked down the ramp and did their best New Day impression. It’s kind of like watching Hillary Clinton and Ellen dab. The match was rather short and they still managed to bring the Grammy thing three more times. The Usos won when Jey pinned Adam Rose after a giant splash.

We were promised an interview, but Miz has been on this jealous kick lately. So he basically cut a promo on AJ, Daniel Bryan and the entire “Yes!” movement. He landed a pretty good punchline with, “This is the WWE and the E is just as important as the W…”. Message! eventually, AJ had enough and bounced Miz around the ring until the Hollywood star escaped the ring.

Deontay Wilder is in the arena? Where is Shannon “the Cannon” Briggs? Let’s go champ!

It’s hard to watch Charlotte work at such a fast pace with these shorter Divas. Just because she’s gifted athletically, doesn’t mean she should do half these moves. Wait. Was Ric Flair bleeding? Did he blade while standing at the apron? Look at the right side of his head. Brie snared the champ in a sleeper. Ric stood on the apron and had a short dance party. Somehow the announce team attribute that to distracting Charlotte when she broke the sleeper and went for the Figure Eight. Brie caught her slipping and small packaged Charlotte for the win.

Earlier today Bret “The Hitman” Hart announced on the ‘gram that he is in a battle prostate cancer. Bruh. Why don’t cancer go and get a hobby and leave people alone?

This match was pretty short for such a clash of the Titans. The Wyatts tried to distract Show throughout the match, but Biggie pinned Rowan after a chokeslam. Didn’t matter. After the bell, the Wyatts triple-teamed on him, dropping them Fifth Ward Ds on him. They finished him off with a double bodyslam on the steel stairs.

White folks. I don’t know how many of you are reading this review. But when Titus Oneil throws up those hooks and barks, it’s kind of not okay for you to return the gesture. This was another short match but the moves were pretty crisp and believable. O’neil hit Clash of the Titus relatively quick. A bruh of Omega Psi Phi Fraternity Inc. getting a victory in Birmingham, AL on the first day of Black History Month? Dr. Martin Luther the Kang Jr. gotta be causing his countenance to shine down upon us.

HHH in the Belly of the Beast

Hunter invited himself into Brock Lesnar’s locker room and asked him about the events of the opening of the show. It was something like;
“You ready to bust one of them n***** head ha
You ain’t scared ha
You know how to play it ha
I know you ain’t just gonna let a n**** come and punk you ha
Stunt and front you ha
Straight up run you ha”

KO took control of this one early. Zig tried to fight back but kept getting knocked down by Owens. There was also a little shout out to Bret Hart when Dolph took the chest-first turnbuckle bump. Classy gesture, boys. The action spilled outside the ring and Ziggler hit the Famouser on the floor. They exchanged Superkicks. Kevin went for the Pop-up Powerbomb but Dolph floated over and caught Owens with the Zig-Zag and picked up the win.

Mark Henry was honored in a video package for Black History Month.

I don’t know how I feel about that. Not that he shouldn’t be celebrated, but it just feels like WWE is saying, “Hey man. Some of my best friends are black!”

Sasha Banks came out to announce she is going solo. Jermaine and Tito came out to say they were cool with it and assured her Team BAD was still a family, even if they were competing against each other. Hm. Sounds legit. No way they could be lying, right?

The ladies started at a deliberate pace exchanged some technical holds and escapes before Banks took over and knocked Becky out the ring. Tamina and Naomi jumped on Lynch like she was that girl that was talking smack on Facebook. Sasha stopped them because she wanted to do it on her own. I guess the BAD girls took it as a sign of disrespect and jumped Banks out the gang. Lynch made the save and Naomi and Tamina made off into the night. Dr. King was probably not very happy.

Goldust stood in a toilet waiting to catch R. Truth to ask him if he’d thought anymore about the partnership he’d proposed last week. Truth said he was flattered but did not want to tag with a weirdo like Goldy. Goldust fired back with two words: Little. Jimmy.

Big E called the arena “Bootyham” and the New Day galloped down the aisle like the magnificent stallions they are. Xavier Woods cut into the Rock for being a dirty comic. Insert Amber Rose/Kanye West finger booty comment. Our heroes then pledged to beat up The Rock’s cousin, Roman Reigns and his friend Dean Ambrose.

Reigns and Ambrose took control early beating up on Kingston even teasing a Superman punch. Big E pulled Kofi out of the ring to regroup and recoup as Raw went to commercial. The New Day was firmly in control of match returning from the break. They cut the ring in half and beat on Ambrose until he was able to hot tag Reigns. Roman took over and hit E with a Samoan Drop. Ambrose took things outside and leapt through the ropes on Big E. New Day gained control again shortly and went for the finish on Dean, but he wiggled out of the Big End. Kofi avoided getting knocked off the top rope but ran into a Superman punch. E ate a Dirty Deeds and was down for the count.

After the match, the Beast Incarnate charged the ring, but waited for the New Day to attack Ambrose and Reigns from behind. Reigns was knocked out of the ring and Lesnar picked his spot. Ambrose was hoisted up and tossed in an F-5. Lesnar stood tall at the end.

Overall it wasn’t a bad show. There were a lot of short matches but the two-segment matches really carried the show in the way of action. Nothing mindblowing, but they continued ideas from last week’s show which is reassuring. There isn’t a lot of time to build up to WrestleMania and even less time to build to Fastlane. So for what they lack in time, the WWE will have to make up for with consistency. This show was a step in the right direction.