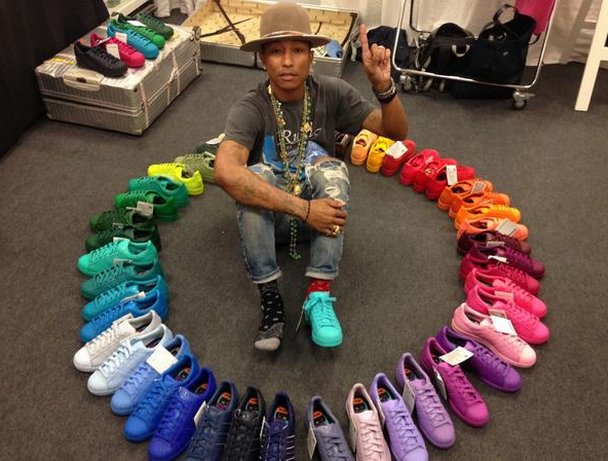 Adidas is on fire lately with their new partnerships. Just at the end of last year they brought on Kanye West. Earlier this year, they signed Pharrell onto their team to help with design. Everybody knew how great of a decision this was for the company as Pharrell is an important tastemaker to influence pop culture. Last week, the world was revealed the very greatness we were all expecting. Skateboard P dropped a gem on the social media sphere and got everybody super hyped. The producer was surrounded by the familiar and beloved style of Adidas: The Superstar. What’s better is that he was surrounded by the style in every color from A to Z.

If my face were an emoji the moment I viewed this photo, it would have been, without a doubt, the heart-eyed one.  I continued to do more research of my own, because I definitely wanted me a pair. My findings concluded that I NEED me a pair, and what I found will probably excite you just as much. I fibbed when I said five reasons in the headline. Here’s  four reasons why I’m going to love the #SuperColor Pharrell x Adidas Superstars set to release March 2015 and ONE reason why I could possibly love them even more.

1. It’s not a Stan Smith —  We haven’t seen much out of the Pharrell and Adidas partnership, but what we have seen are all Stan Smiths. If there’s any Adidas I love and rock with, it’s the Superstar A.K.A. the shell toe. AND it comes in almost every color imaginable? What’s not to love? Pharrell has said that the Stan Smith is a sneaker that he grew up wearing, so it’s a sentimental piece of his adolescence. It then was obvious that a lot of the collabs he’d take part in would include the Stan Smith. But, I was happy to see that he branched away from it and took advantage of the Superstar and its popularity as well. To be honest, it’s probably the only Adidas I’d put on my feet (aside from the Samoa or an all-white pair of Hard Courts I may have to cop as well).

2. They’re versatile – even if you don’t normally rock with Adidas, you can’t say one of these colors isn’t your favorite. Literally, every color of the rainbow is featured in this mix, from pastel colors to earthy tones and bright fluorescents. There are endless style options that could come out of just one pair of these. They touch an audience further than just Adidas lovers and that is exactly what Adidas is reaching for with this release.

3. These mono-colored kicks support color blocking. Which I LOVE. Color blocking is when you wear multiple solid colors in one outfit (in a way that works). You can either wear colors of the same nature (navy, indigo, and violet) or colors that completely clash (as long as you do it tastefully). It’s a style that’s definitely still in. Given that the #SuperColor Adidas come in virtually every solid hue, they can add just the right splash of color to a color blocked outfit! For instance, your top could be all bright yellow, your bottoms could be solid navy and pop on a teal pair of the #SuperColor Superstars and you’re successfully color blocked out.

4. The #SuperColor line is a beacon of light for the underdogs in the industry. This venture is a really creative way to keep a 65-year-old company relevant. There’s a gang of people out there that would call Adidas tired or washed up. It’s a good thing they’re bringing young influencers onto the team, like Pharrell, who contribute fresh ideas to a company that, at times, can be characterized as outdated. I love that they’ve taken an iconic style and put a contemporary spin on it with the monotone colors. They took the classic shell-toe and made it a fashion-forward piece, as solid colored footwear is both versatile and trendy. This has brought the Superstar back into conversation and, most likely, back onto the feet of sneakerheads (and color blocking lovers).

5. Now this isn’t a confirmed detail on the pack, but rather a question – WILL THEY BE AVAILABLE IN WOMEN’S OR KID’S SIZES? I can’t tell you HOW many times I’d love to get my hands on a pair of special or limited edition kicks but it’s impossible to find my size because they weren’t even made in my size to begin with. Ladies, don’t tell me you can’t relate. I’ve missed out on so many collaborations I anxiously anticipated just because of the fact that I don’t fit in a men’s size 8 or higher. If Adidas makes this release available in kid’s or women’s sizes, praise the Lord because I done fell in love.

My thirst for more information on this project was only temporarily quenched after my research. I have a few more unanswered questions for the guys over at Adidas, like: Are you going to drop every color we see in the photo? How available are these kicks going to be? Could I get them at my neighborhood Foot Locker or am I going to have to cop them from a private seller? Are they going to sell at the typical price for a Superstar or will the cost be bumped up due to its connection to Pharrell, exclusivity, etc.? I’m sure I’ll brew up a few more questions before next March, so look out for another #SuperColor post as it gets closer to the season.