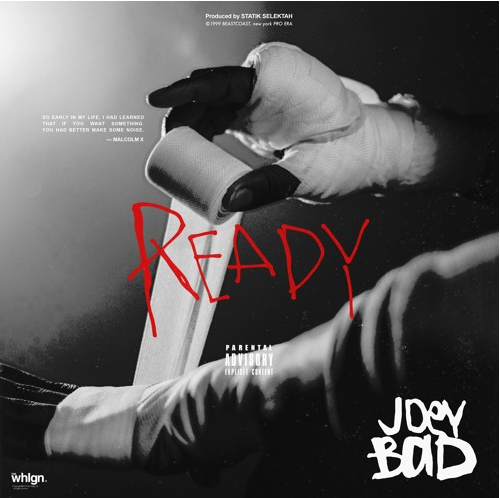 Joey Basa$$ Is More Than “Ready” With His New Single

Joey Bada$$ is an absolute knockout on his first single of 2016, “Ready”. This track unleashes a barrage of lyrical ammunition at all the haters out there who’ve doubted Joey’s musical talent. Joey’s effortless cadence and flow is backed up by top notch production from Statik Selektah, who just dropped a fire single of his own last week.The two come together on “Ready” to address all of Joey’s doubters.

“Ready” starts off sweet and simple with some wavy synths and bells before a traditional Boom Bap beat pattern slides in underneath the melody. While it comes off as generic at first, Statik Selektah turns the vibes up to match Joey’s bars once the rapper jumps in. Joey is a boxer in “Ready” and reminds his haters that “I was born/ready now I’m comin’ heavy”. He talks about how critics try to “box” him and compares himself to “Rocky/ when it comes to paparazzi”. Joey also seems critical of the Southern Wave when he raps “I’m the youngest n–ga reppin’ heavy for my city now/ all these other n–gas think they from the South”. “Ready” is devoid of many of the Trap elements overly prevalent in music today- there are no heavy 808s, no bevy of hi hats or snares. While it may sound generic, “Ready” really feels like a throwback track. He ends the song with The Fugee’s take on Delfonics’ original lines- “Ready or not/ here I come/ you can’t hide”- Joey is definitely ready to bring it this year.

“Ready” did get some hate from listeners on the rapper’s SoundCloud- some thought Joey could do better, some thought the beat was overdone or basic. Whether you’re feeling “Ready” or not, Joey’s talent behind the mic and his readiness to back his bars up are admirable in the days of petty Twitter beef. Though it hasn’t been officially confirmed, Joey Bada$$ will apparently be releasing a new album sometime this year. In between his work in the studio, Joey has been moving into the teaching realm. He delivered a moving lecture to New York University student’s this past Friday and will lecture again this week at Harvard University. Get “Ready” to take on all your haters and listen to the track below.