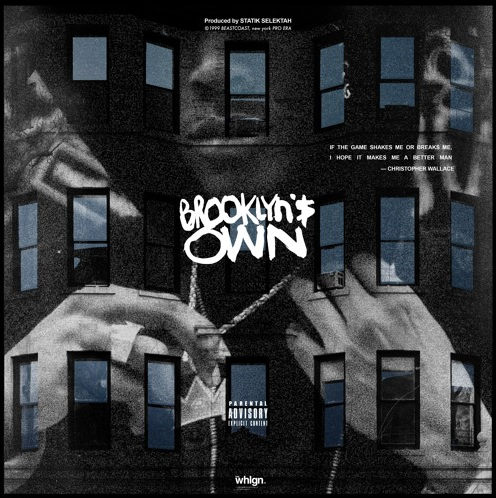 If you were alive 18 years ago, you remember the day that the hip hop world lost one of its greatest emcees. We’ve seen Biggie’s story splashed across the front pages of magazines and dramatized in the mediocrely done biopic, Notorious. Thankfully, Biggie’s memory was properly honored across the internet yesterday on the anniversary of his death, with many fans and music outlets paying homage to his lasting influence over the music world. Joey Bada$$ took it a step further and rained some fire on us with his new song dedicated to Biggie, aptly named “Brooklyn’s Own”.

Statik Selektah killed the laid back beat with bright chords on the synths, a steady drum pattern and a “Brooklyn’s Own” remix of the Mary Jane Girls’ “All Night Long” on the chorus. Joey’s lyrics touch on his admiration for Biggie but also on his own potential to become one of the next greats in hip hop as he raps, “Bury me in gold 47 karat casket/ Resurrect my soul come back as your favorite rapper”. Its obvious that he feels that he carries one of the torches Biggie left behind and with Joey’s relentless work ethic and lyrical chops, we can’t really dispute that. He reps Brooklyn to the fullest as one of the creative birthplaces of modern music, more specifically of hip hop. Joey definitely did Biggie justice on this one.

Listen to “Brooklyn’s Own” below and if you haven’t gotten enough of Joey Badass, check out his other projects on Pro Era Radio’s SoundCloud.