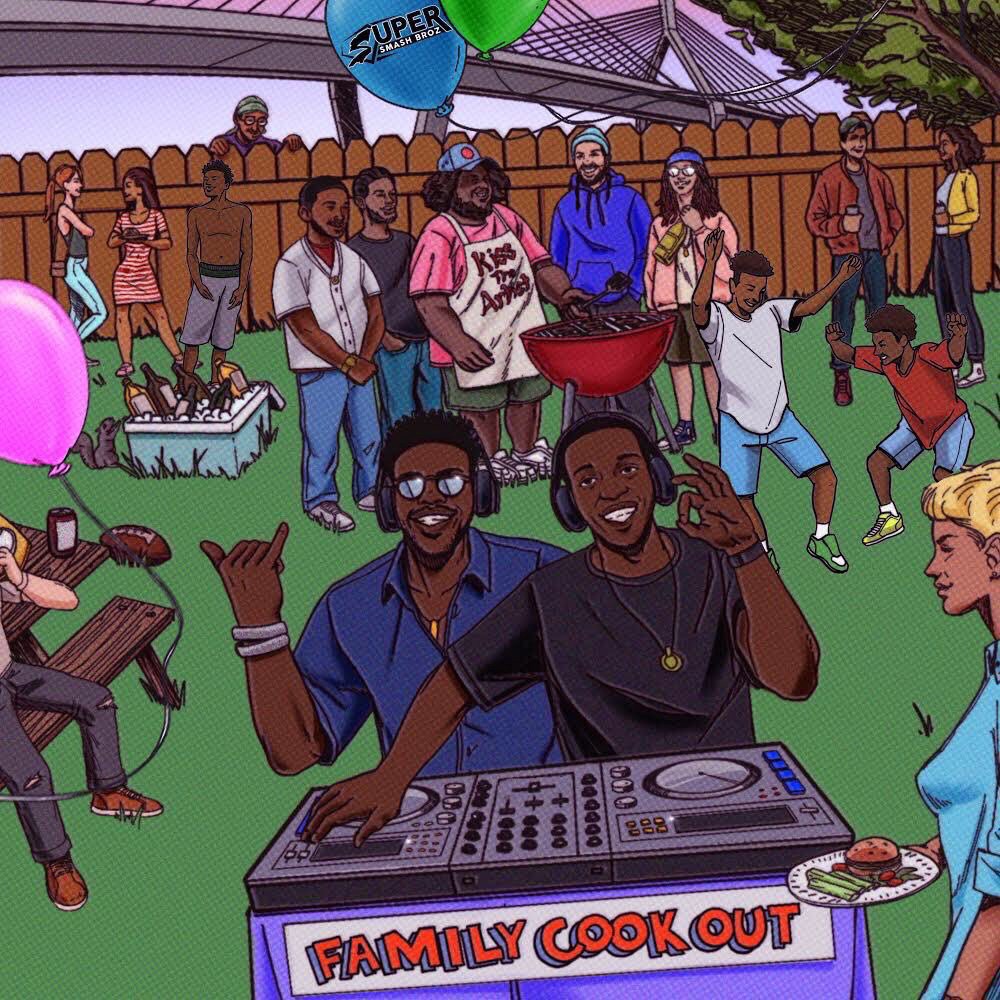 DJ duo Super Smash Broz have been running around the world spreading the gospel of good music for the last couple years. Either on festival stages as tour DJs backing up MCs like Michael Christmas and Cousin Stizz or crushing sets nationwide alongside producers like Metro Boomin, the Roxbury natives have been seen on the highest level the power of good music.

Now the real life brothers Fre$co and Nomz are stepping into the arena with their own project, Family Cookout. The DJ tandem take the energy from their Get Your Vibes Right mixtape series and pour their own originality and influences into the work in a beautiful fashion. With production from newcomers like Tee-Watt, Lil Rich and Wizz Dakota under the watchful eyes of the Broz, Family Cookout has a synergy that keeps you coming back.

Years of rocking parties has not been wasted on the SuperSmashBroz. The album is put together like a set at great party with each song building on its predecessor. If DJ Khaled has made a career of pulling stars together for megahits, SuperSmashBroz gathered the next wave of great Boston artists to display some of the outstanding talent in the city.

It makes sense that celebration is part of the foundation for the project. But it has much more to offer. Family Cookout is the audio personification of Black Boy Joy. And the joyfulness that the Roxbury, MA natives display is as multilayered and complicated as our existence in America. The vibes are right through out for sure. But the rawness of the hood is right there bubbling under the surface in the SuperSmashBroz work. These guys aren’t making pop music. They are making music that pops for any occasion. And all your cousins are invited.

Your wild cousins like Reem Skully and rising star Dutchy DoBad get aggressive on album opener “It’s Different.” Jefe Replay, one of the most talked about artists in the new generation of Boston comes alive on “Replay Interlude.” Your lightskinned cousin from Cambridge, Millyz brought a healthy serving of bars to go along with Rosewood Bape’s catchy hook on standout track “Nice Work.” They even get international. Nomz and Muy team up with Wizz Dakota to put their Naija roots on display with the afrobeat-influenced “Confused.”

Songs like “A Friend” featuring Izo, lead single “Adjacent” with Maye Starr and thee breakout “Still” with Big Leano and Vintage Lee show off the Broz hit making ability. Over and over you will find yourself falling into the catchy hooks and production. Family Cookout is designed to make you love it as a whole while its multitude of musical approaches will keep you from being bored.

From the production to the guest performances, SuperSmashBroz’ Family Cookout delivers a superior snapshot of what the new and next wave of Boston Hip-Hop sounds like. Press play and take a listen for yourself below.