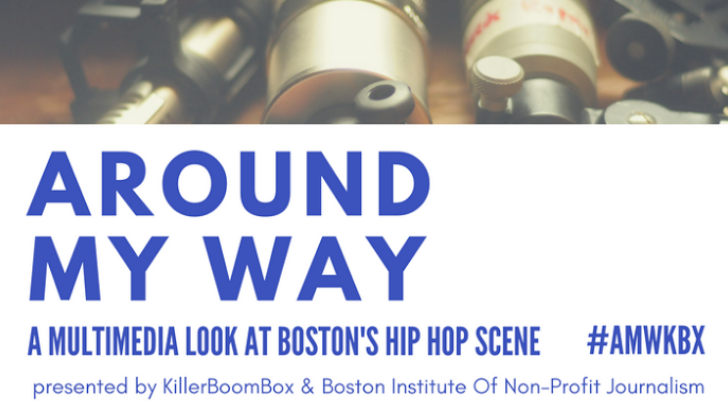 Introducing … AROUND MY WAY (#AMWKBX)

If we don’t tell our story, someone else will.

Or worse—no one else will.

Back in 1987, about 1,000 years ago in music years, Rakim said the oft-quoted line, “It ain’t where you from / It’s where you at.” The rap god was defending his native Long Island, because in the world of hip-hop, like in politics and sports, repping your hometown is essential. This hasn’t changed in four decades, even as the genre has metamorphosed dramatically.

In Boston, there is notable American history all around us. We walk on the same streets that are home to the first public school, the first subway system, and the first public park of its kind, Boston Common. At the same time, the Athens of America packs much more than you will find in most online tributes or even on the Freedom Trail.

Specifically, Boston has been contributing much dopeness to the world of music for some time. The history of black music in this town is especially rich, even though a lot of stories from the city’s robust jazz heyday have been whitewashed or forgotten. Then there’s hip-hop, all of which some parties inaccurately think came out of New York City exclusively. While artists from the Big Apple obviously laid the initial foundation, Boston has had a voice in the game since very early on.

CHECK OUT THE DEBUT #AMWKBX PODCAST

Put simply, we got history. It’s just that a lot of it is often—unfortunately—passed over while it’s happening. Of course we’ve all heard about the mainstream successes of Aerosmith, New Edition, New Kids On The Block, and Passion Pit, but what about the rest? What about hip-hop? And what about what’s happening right now?

As proactive local music fans of all stripes are aware, Boston is having a renaissance of sorts at the moment. That dynamic music scene serves as the basic premise of the multimedia look at the Hub’s rap scene titled Around My Way (#AMWKBX) that we are debuting with a new feature on South End MC Avenue, whose story is at once unique and that of countless up-and-comers from Boston, then and now.

There’s a beautiful energy building around these parts. Hip-hop’s aspirational spirit is alive in Boston, with amazing artists popping up on the national and international scene with increasing regularity. From Cousin Stizz and Michael Christmas hitting the festival circuit, including Boston Calling, to BIA signing with Pharrell and even performing with the legendary producer at the Latin Grammy Awards (where their single also won a trophy), work is getting done. Meanwhile, with the decline of media—including in-depth arts and entertainment coverage—very little is actually known about these rising hometown heros. And so we set out to change that.

With Around My Way, which will include written, audio, and visual installments over the course of this entire year, we won’t only be looking at the musicians who we expect to populate the Billboard charts. In general, we hope to harness the independent energy that is increasingly prevalent in the current wave of Boston hip-hop and to show how these artists have taken matters into their own hands to expand their reach. Additionally, we felt it was critical to include the voices of people who are making things happen behind the scenes, and who are toiling to keep the lights on and to offer hope and structure to the scene.

For those immersed in Boston hip-hop, these are stories of the city. Every neighborhood has many to tell, and we are seeking to learn about what’s behind so much creativity and drive. On the reportorial side, Around My Way is done in the tradition of the kind of music journalism that we as writers fell in love with back in the day, when music magazines covered more than just new releases. Which is why we teamed up with the Boston Institute for Nonprofit Journalism, which understands and sees the value in this vision, and has helped us assemble some of the best young and experienced multimedia journalists for the project.

Stay tuned. Each month for the foreseeable future we’ll publish a feature article, plus related podcasts and playlists, as well as video and photos to help document the culture of one of the most tragically slept-on yet dynamic hip-hop scenes anywhere. Follow us and share our pieces all year to help show the world that Boston is much more than the land of Wahlburgers and professional sports championships.

Keep track of the series at DigBoston and KillerBoomBox, and by following the latter on social media @KillerBoomBox plus the hashtag #AMWKBX.