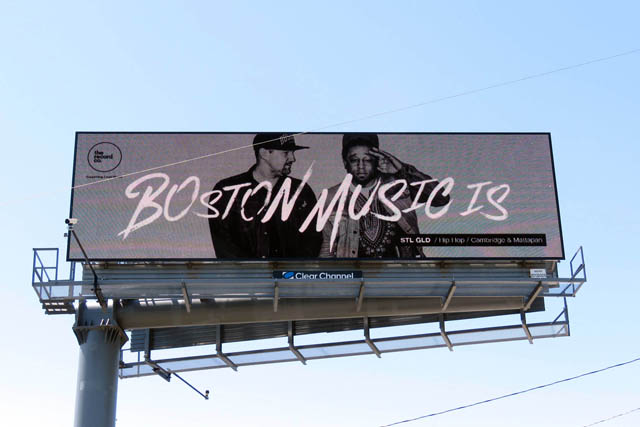 Commuters in the Boston area are getting a look at the faces of Boston music due to a highly visible ad campaign for local non-profit The Record Co. Billboards, subway and bus shelter ads around the city have popped with fixtures from the scene like Dutch ReBelle, STL GLD, and Michael Christmas with the slogan ‘Boston Music Is’.

The Record Co. is excited about the project. ” MullenLowe worked with the students and chose us as the client. The students came up with the slogan ‘Boston Music Is’ to try and highlight the diversity in genre/talent in the city,” TRC’s Program Director Jesse Vengrove explains “We’re excited that local companies are willing to give public exposure of this level to artists in Boston and hope to show that the city really cares about this so they keep doing it.”

The ads were created from a student directed photo shoot at the MullenLowe offices. The students worked alongside the creative team at Mullen to craft the look and layout of the campaign as well. Through companies like RapportWW, JCDecaux, Out Front Media, and Clear Channel Outdoors the outdoor advertising and mass transit ads were donated to the project. Other artists such as Bent Knee, Julie Rhodes Tigerman WOAH, and Ruby Rose Fox were included in the shoot and campaign as well.

Charged with the mission to “create a sustainable and equitable music scene”, TRC has been working to increase the visibility of the city’s homegrown artists through their efforts including the release of the BEAST compilation in 2016.

Check out the more of the Boston Music Is campaign below.