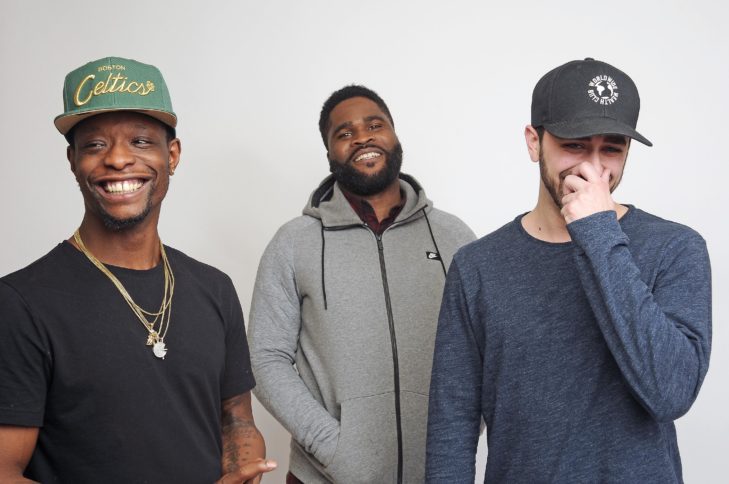 AROUND MY WAY: THE PULL UP

DJ Real P, a rapper, DJ, and promoter who co-founded the popular Hub party the Pull Up, recalls his deep love for the game fomenting inside of the Boston Garden nearly 20 years ago. It was his first live hip-hop experience.

He continues: “I was a kid. … I went with my older brothers. I remember being super amped because it was my first time seeing Jay-Z. The energy was OD. … I was such a hip-hop head. It was fitting for that to be my first real concert.”

His partner, producer and engineer Marquis Neal, had a special outing all his own.

“It was the Ruff Ryders tour,” he says. “I was backstage with Made Men. This was around the time they shot their “Holla Back’ video. And I also saw DMX too.”

That love of the live show and a do-for-self attitude is the driving force behind Real P, Neal, and manager Steven Foley, who operate the Boston-based promotion company New Era of New England, or N.E.O.N.E. (pronounced “anyone”). The latest quarterly expression of their mutual affection, the Pull Up, will showcase the area’s emerging and established talent. But for this unique crew, it’s not just about seeing artists perform live—it’s about the building of community that comes from regular connections, and fixing systems that for too long have denied people an equal shot.

“I think it’s really important, especially for New England-based artists,” Real P says. “[They need] to connect with their fans.”

ROCK CLUBS AND BACK ROOMS

Live performance is the genesis of hip-hop. That back-and-forth, call-and-response connection of early architects and their participating audiences have forever been the lifeblood of this culture. Hip-hop’s never been a soundtrack fit for quiet, bedroom-based, navel-gazing introspection. It was made for parks and block parties with Eiffel Tower-sized stacks of speakers, and spurred by kids who got turned away from downtown clubs. When those doors were all closed, they built their own spaces.

In Boston, the music’s birthplaces were park jams inside spots like Ripley Road Park in the Four Corners section of Dorchester and Almont Park in Mattapan. For local rap groups, those spaces, along with the talent show circuit at neighborhood community centers and auditoriums like the Lee School, became the go-to spots for anyone building a name for themselves.

“It’s always been a struggle,” says Geoff “Geespin” Gamere. Now the influential music director for Power 105 in New York, Geespin spent years as a fixture in the Hub’s nightclubs and used to spin for JAM’N 94.5. In his salad days, he ran into innumerable walls trying to break into the downtown scene by playing hip-hop.

“There’s never been a go-to hip-hop spot in the city,” Geespin continues, “so it’s kind of been spread out. It’s never easy in any city to bring in a hip-hop movement.”

The relationship between nightlife and rap music has always been a perilous one. As the music matured in the mid-to-late 1980s college campuses, rock clubs like the Rathskeller and the Channel, and dance clubs like Narcissus served as the homes for hip-hop outside of the hood. When acts like Wu-Tang Clan, KRS-One, and the Beastie Boys came to town, they hit those stages.

There are variations of this story depending on whom you ask, but generally speaking, after the Rat closed in ’97, the Boston hip-hop landscape, on the verge of increased national recognition via our region’s then-budding “underground” scene, began to migrate toward Allston and Harpers Ferry (now Brighton Music Hall), and across the river to the Middle East and sometimes the since-closed Western Front in Cambridge. Acts that had built followings made up of local college students found new homes and new prominence. But other groups, particularly those from neighborhoods where the original park jams took place, were stuck on the outside looking in.

Business practices also kept artists from stages. There were often stringent dress codes for Hub hip-hop parties, especially in downtown Boston, while dance nights had to advertise themselves as Top 40 to break in. Under the guise of paying dues, some artists pay money to promoters to perform; in some cases, locals buy their way on to the stage before a headliner from out of town, but then have to sell tickets in order to get their money back. As a business practice, this works to lower the promoter’s risk for sure. But it also results in uneven and sometimes haphazard shows. Imagine being a national headliner and seeing half of your house leave after your opener’s set because some beer-pounding bros were only there for their friend. The chance to groom your next big star from the scene is lost.

This is the hand the gang behind the Pull Up was dealt. But it’s not the one they played, and it didn’t play them either.

A NEW NORMAL
Having a family member in the business did more for Neal than give him great backstage access. His uncle is Jeff Two Times of the controversial, legendary major label outfits Made Men and Almighty RSO, and so Neal got to see for himself the intensity and drama that can come from waving hip-hop flags around this town. At the same time, it wasn’t a rap concert at all, but rather a performance by one of his favorite rock groups, that opened his eyes to the possibilities of what could be done on a stage.

“I went to [see] Radiohead, and it was beautiful,” Neal says. “Everyone was singing along. It was great. Then I said to myself, ‘I want to do this.’ I wanted to bring that energy back into the hip-hop world. This is a vibe. This is an experience.”

In the years that followed, the Dorchester native built relationships throughout the scene, including meeting Roxbury’s Real P while interning at a local radio station. Real P had developed his name as a DJ and an MC, while Neal, as the manager for local favorite Dutch ReBelle, had been building with an Arlington native and fellow talent manager named Steve Foley at several shows. Before long, they all threw down together on a boat cruise, which went so well that they decided to keep rocking as a unit. Next came the idea to forge their own platform instead of waiting to get booked by others, and in 2016 they created N.E.O.N.E. On a mission to create a spot for artists who are building grassroots buzz, fall of that year, they launched the Pull Up with a sold-out show at the Middle East Upstairs in Cambridge. The follow-up show downstairs in the larger room in the January of 2017 was a success as well, but as members of the crew told WBUR last month, attempts to host a third installment were rejected. After a year of searching, N.E.O.N.E. landed at ONCE Somerville, where the series will reboot this Friday.

EACH ONE TEACH ONE
Even with hip-hop being heralded as the leading genre in America, and with Massachusetts artists like Joyner Lucas and Cousin Stizz selling out large venues nationally, the music can still be a tough sell here in Boston.

Against that backdrop, the Pull Up does its best to walk less experienced artists through everything from contract negotiations to sound check.

“Some of these artists are new [to performing live],” Foley explains. “They are new to contracts. It’s their first or second time on the stage. A lot of people get the internet buzz now and never get to get on the stage. We tell these kids, ‘It’s your craft. Take it seriously.’”

“It doesn’t feel like a local showcase,” Neal adds. “We try to position each artist on the lineup as their own thing, and try to promote them as a star. … We aren’t just trying to put people on a bill and have a show.”

That approach includes making individual flyers for each artist, interviewing their performers and distributing the videos on social media ahead of time, curating a playlist to familiarize the audience, and paying artists. These guys are flipping the paradigm that artists should be grateful for the opportunity, and are treating people like professionals. It’s a major shift in a game where so many others are still practicing record industry rule #4080: Record company people are shady.

“Even the logistics behind the event are the smoothest I’ve ever experienced in Boston thus far,” says Kaovanny, a singer/rapper who’s ecstatic about the energy that the Pull Up represents. The Lawrence-based artist has gone on multiple tours through Latin America and counts the experience booking the show amongst her favorites.

“The more we were involved with the team, the more excited and inspired we were to do it,” Kaovanny adds. “I know everyone is going to bring their best show. … It’s super important for my motivation to continue leveling up.”

GETTING TO THE BAG
In the changing music world, hitting stages on the regular is more than just an ego play. The experience is a necessary part of a city’s art scene on the consumer side, and an essential part of one’s bottom line on the artist side. Performing is one of the main ways that an artist can make a living and garner the attention to move to the next level.

“It’s the only way to tell what’s real and what’s not,” Geespin says about kicking it live. In his latest role as an agent at one of the industry’s leading shops, United Talent Agency, Geespin works with an artist roster that includes the likes of Jeezy and Mariah Carey, and says that things are “different from when we were growing up.”

“There was a proof of purchase,” Geespin continues. “I had 10 dollars in my pocket and I was going to take that to the record store. And I was going to buy that one record that I wanted that day. … I’d take that record home. I read the liner notes. That was my passion for that artist. That was my commitment. Now kids are consuming music differently. … Now they’re being exposed to millions of artists. So the live music thing is the one point where they can take their $20 and actually purchase something.

“You don’t go to concerts for the music. You go for the experience. So the live show for someone like me looking at artists is a direct passion purchase.”

For those hoping to impact beyond Boston, it’s also the only path to the much-discussed next level.

It’s the only way to pull up.